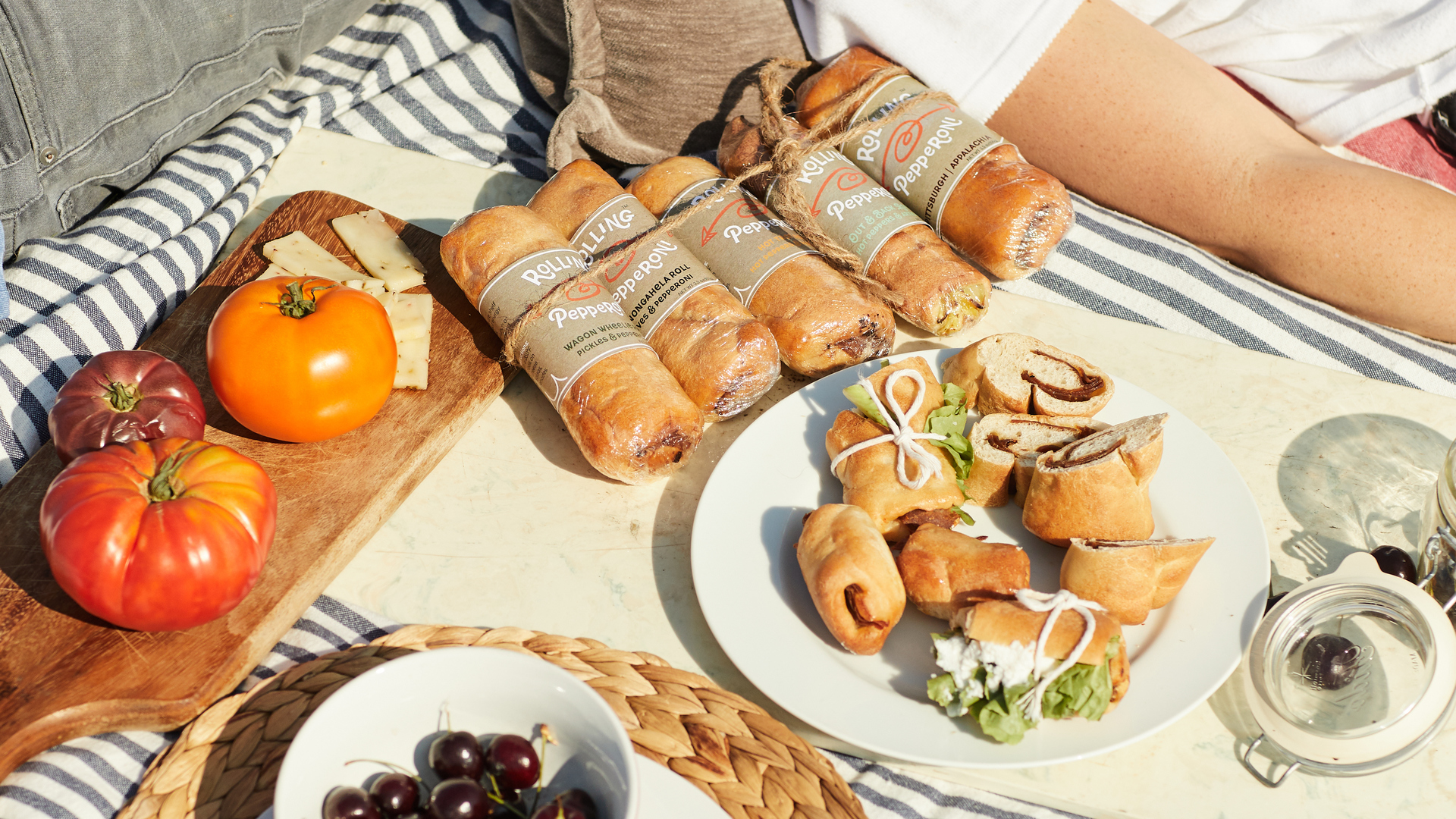 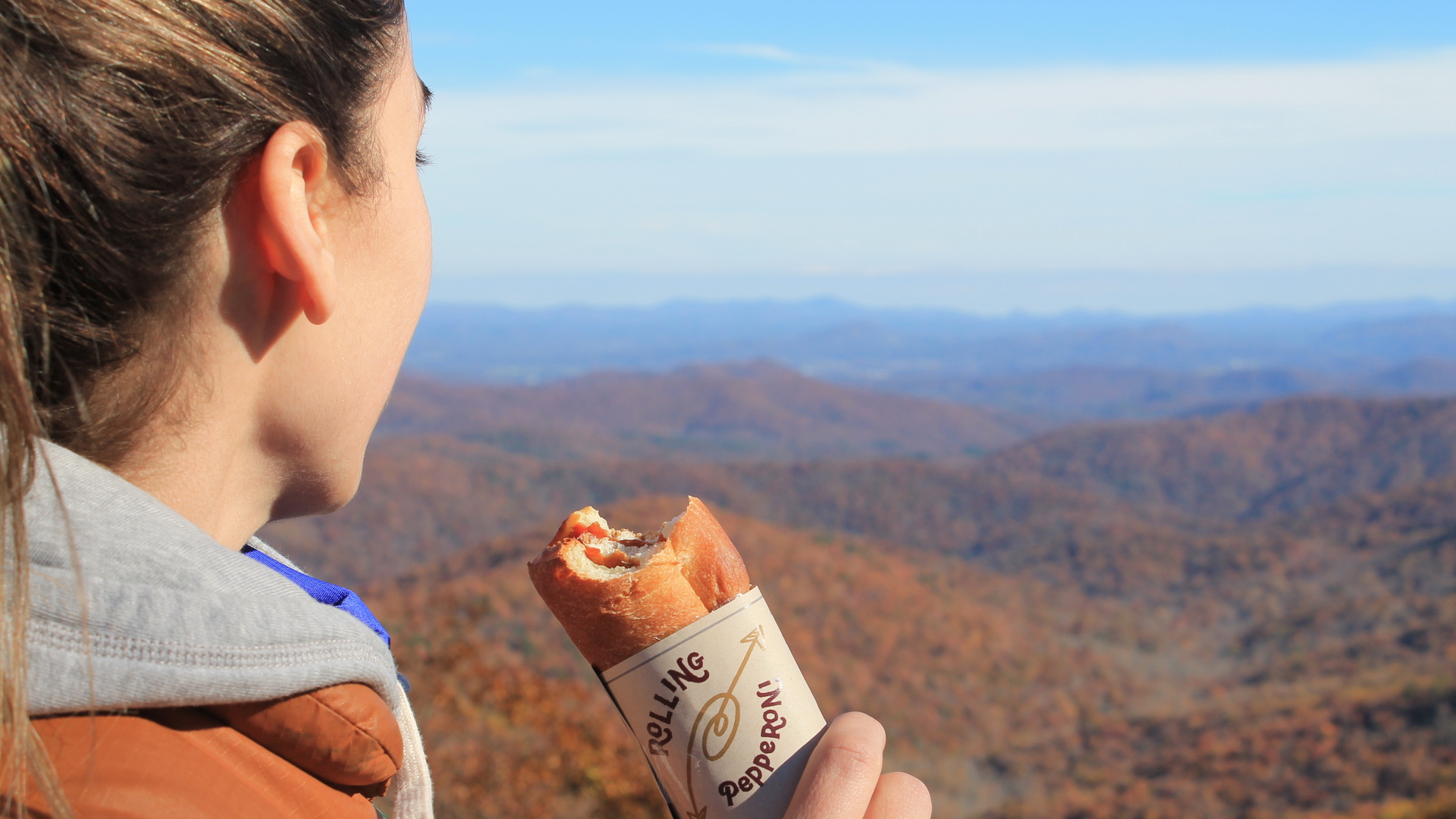 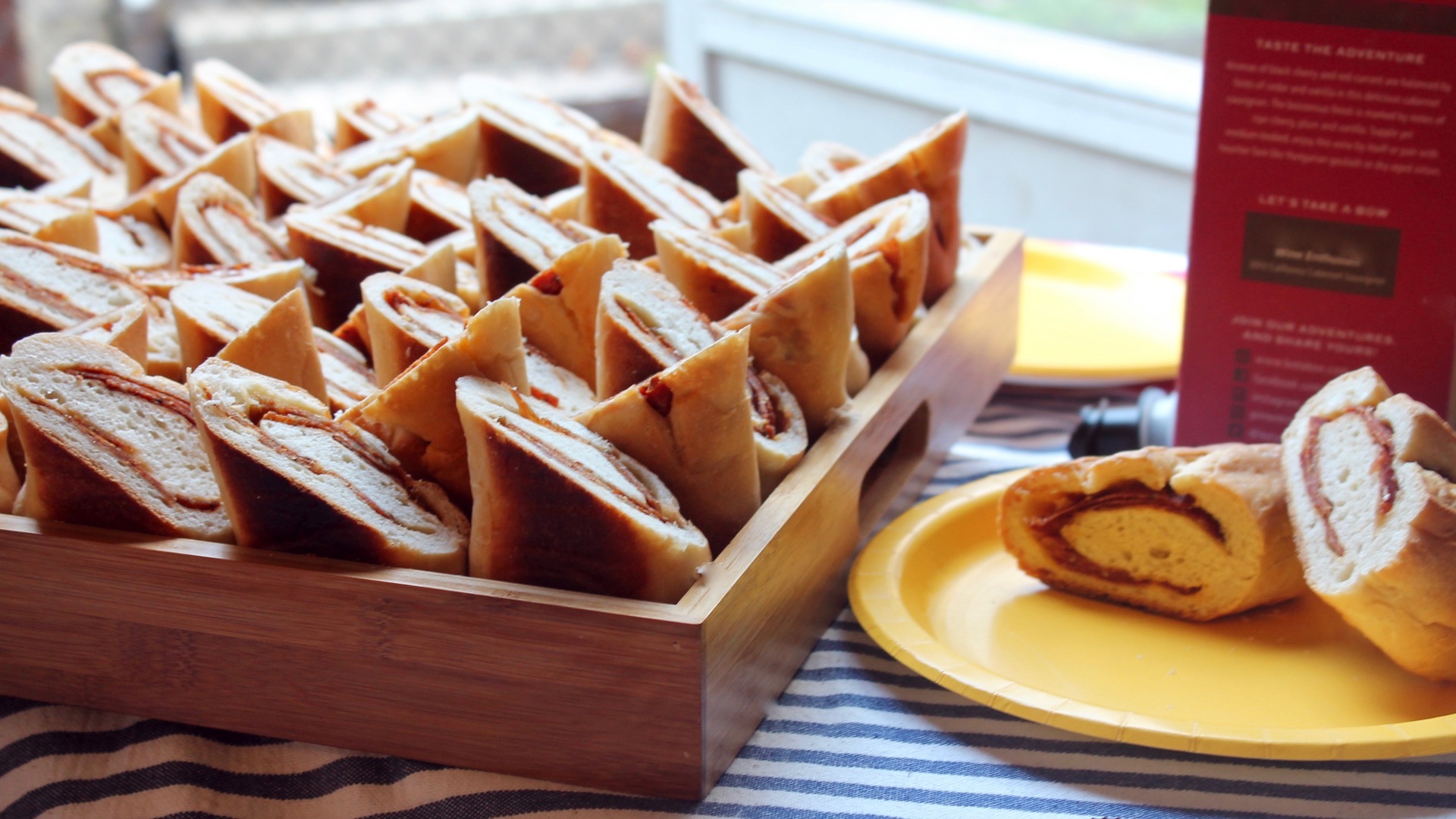 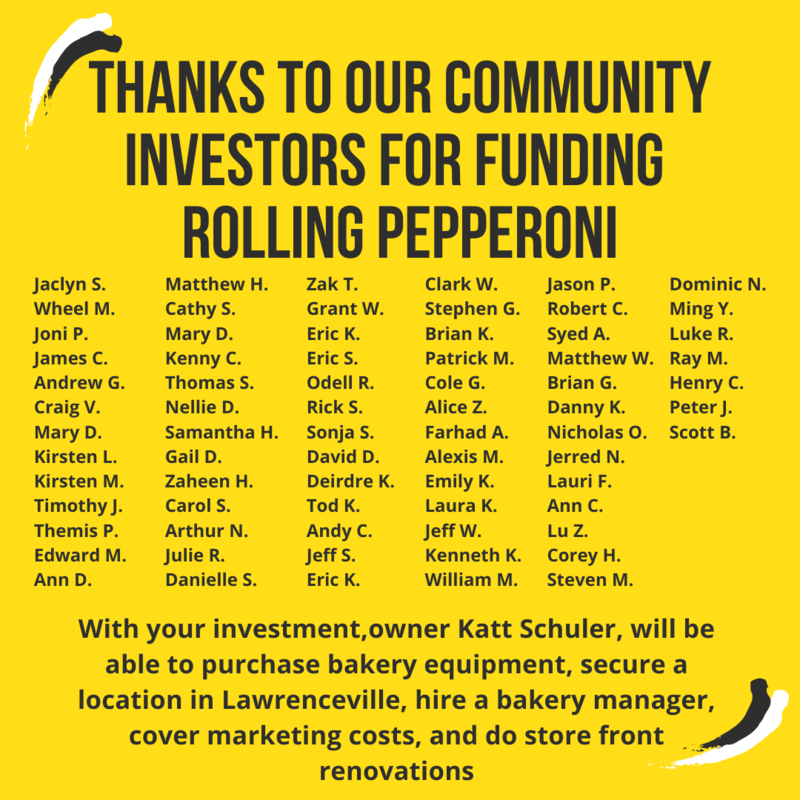 Rolling Pepperoni is a social enterprise bakery selling pepperoni rolls, feeding hungry folks and connecting the Appalachian culture. The mission of Rolling Pepperoni is to unite urban and rural communities by breaking bread across communities within the Appalachian region, from Maine to Georgia. I'm Katt Schuler. I grew up in Elkins, WV and started Rolling Pepperoni after finishing college in Pittsburgh because I love pepperoni rolls as an energizing snack. Even more than that, I love relating with people over the shared Appalachian culture that created these treats. I am raising money for industrial baking equipment, the costs of moving RP into its own bakery and wages for additional staff!

The pepperoni roll was chosen because it originates from West Virginia - the only state entirely within Appalachia, the site of the first American coal mine as well as my childhood home. In addition to selling wholesome pepperoni rolls and artisanal variations of the classic recipe, we’re on a mission to shed light on the Appalachian region’s diverse culture, people and their stories in order to unite communities across mountains and find commonalities in our shared issues and triumphs. 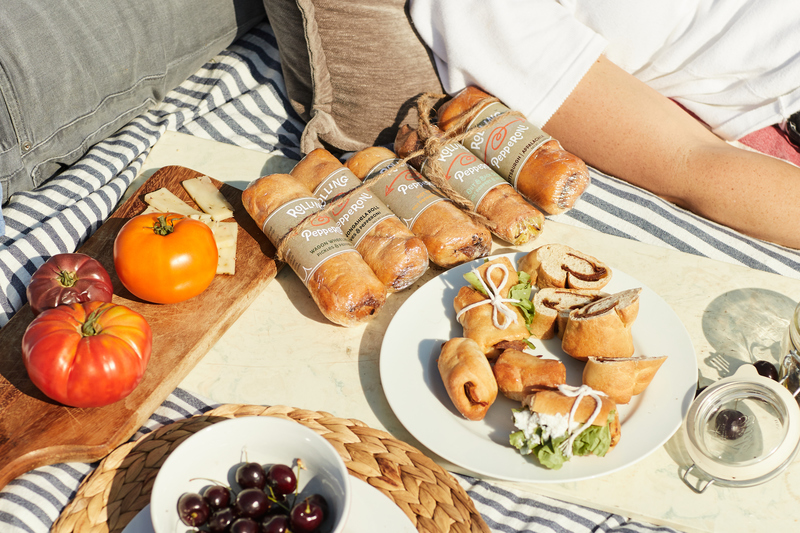 I founded Rolling Pepperoni on April 22, 2015 as a sole proprietorship during my senior year at Point Park University, and began RP’s research and development phase in Papa Da Vinci’s basement kitchen, a small pizza shop in South Oakland. After trying out different types of dough and experimenting with different styles of pepperoni, I created custom recipes for both. Rolling Pepperoni dough is made using local honey and a poolish starter while Rolling Pepperoni Signature Pork Pepperoni is made only with pork, fresh spices, and is cured for six weeks to create one of the most natural and delicious pepperonis.

In December 2015, I moved Rolling Pepperoni’s production to Millvale’s Holy Spirit Lyceum kitchen, an otherwise empty space, with the help of New Sun Rising. Once in its own commercially certified space, Rolling Pepperoni began wholesale distributing to Double L Bar in Millvale, The Wheel Mill in Homewood and 52nd Street Market in Lawrenceville - while also vending at local events and markets like Creative Mornings, the Fox Chapel Farmers Market and Bloomfield Farmers Market.

Until October 2016 I worked full time at Shady Side Academy during the day and baked at the church lyceum at night, expanding into more locations like Grist House Brewery in Millvale, Tupelo Honey Teas in Millvale, Dylamatos Market in Hazelwood and Tom Fridays in Brighton Heights. In October 2016 I made Rolling Pepperoni my full time job and increased wholesale accounts by 300% to include Bryant Street Market in Highland Park, The Food Shoppe in Squirrel Hill and Mixtape in Garfield. After hiring a second-chance employee through Zero Six Eight, Rolling Pepperoni moved to La Dorita in June 2017 to foster better relationships within the food and beverage community. That same June, Rolling Pepperoni was funded for a $3,000 Kiva loan to pay for entrance fees to five farmers markets - Ligonier Farmers Market, Bloomfield Farmers Market, Wilkinsburg Farmers Market, North Side Farmers Market and the Night Market in Market Square. In September 2017, Rolling Pepperoni won the Green Workplace Challenge through Sustainable Pittsburgh on the Micro-Business Level and was awarded by Bob Nutting along with businesses: AE Works, WESCO and Highmark. 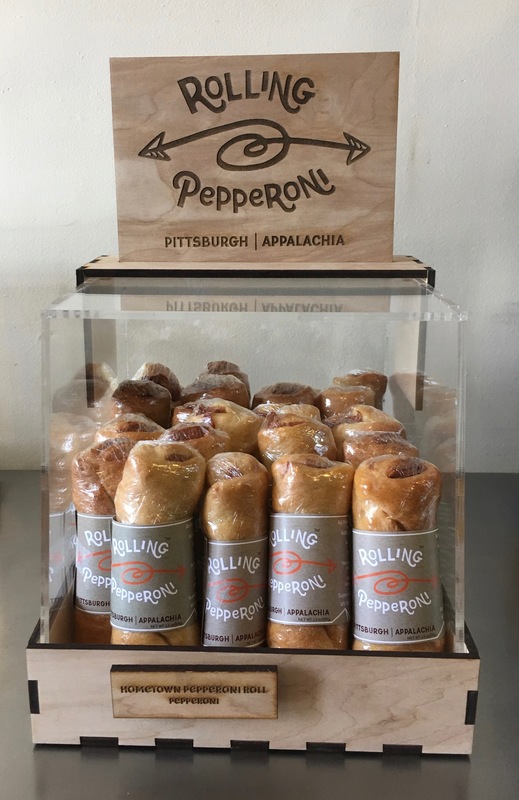 Given a great stroke of luck through friends and the owners of Driftwood Oven - on October 10, 2017 Rolling Pepperoni made its most recent transition to 5304 Butler Street in Lawrenceville to share a bakery with another woman owned baking business, Piebird. Rolling Pepperoni and Piebird split the space 50/50 and it was a great time for growth and expansion in an established environment. Since moving into Lawrenceville RP has expanded distribution to East End Food Co-Op, Carnegie Mellon’s Tazza D’Oro Cafe, Ascend Climbing Gym and Stage AE as their sponsoring food vendor plus eleven additional businesses. All of this while simultaneously baking pepperoni rolls every day, managing distribution, selling-out at events in Cincinnati, Columbus, Cleveland and West Virginia - and maintaining a 33% profitability.

Staying true to Rolling Pepperoni’s mission, in October 2018 I hired RP’s Story Coordinator, Felicia Cooper to collect stories from the entire Appalachian region to be shared on the inside of the pepperoni roll wrappers and RP’s website. The stories change bi-weekly and have featured Dr. Lou Martin, a leader in Appalachian Studies at Chatham University; Candace Nelson, author of The West Virginia Pepperoni Roll; and Brooklyn based singer/songwriter Juliana Carr. Just as suspected, this focus on community garnered much community support. Rolling Pepperoni was featured by MSNBC, Pittsburgh Magazine, City Paper, the online publication PA Eats and The Incline. One excited customer said in response to a story printed on the inside of a wrapper, “That’s the nicest thing I’ve ever read about being Appalachian.” The story initiative not only garners community support, but creates a product unto itself. Just in time for the holidays, on November 2019, Rolling Pepperoni will roll-out for sale Rolling Pepperoni Story Series Volume 1, a hard-back coffee table book that features the stories shared with us.

In April 2019 Rolling Pepperoni formally structured into an LLC and officially ended what I fondly call the “capacity building campaign”. RP’s work as a social enterprise has created a buzz that’s great for company growth and great for the community we seek to serve. By working ethically for myself, the product and the community, over the 4 years of growth and market testing, Rolling Pepperoni has worked with 26 different wholesale customers from varying sectors of the retail market. We still deliver weekly to the original 3 wholesale locations and boasts years-long relationships with 14 wholesale customers that receive deliveries every week except Thanksgiving and Christmas. In 2018 I baked 35,000 pepperoni rolls and sold out with 250 pepperoni rolls every Saturday at the Ligonier Farmers Market. All of this while being a female owned and run business in a field dominated by men. 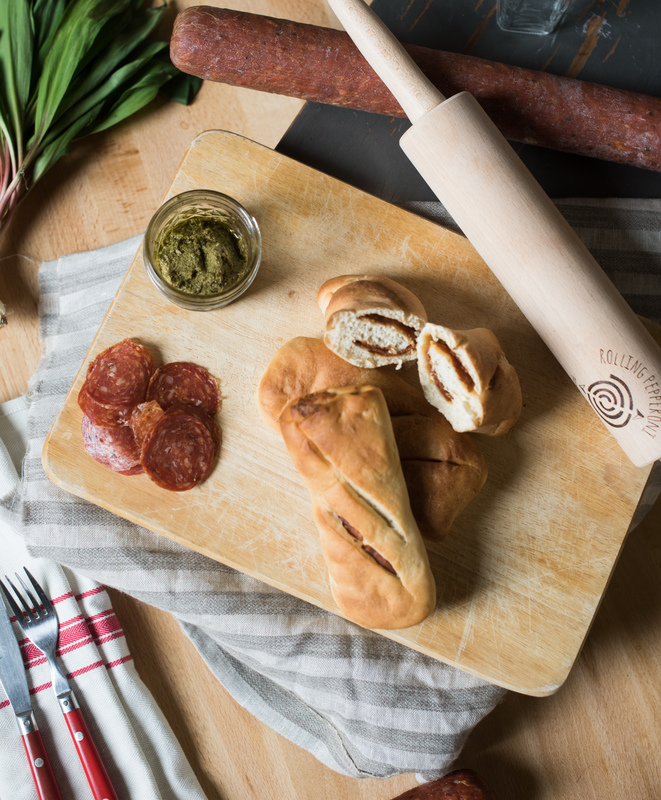 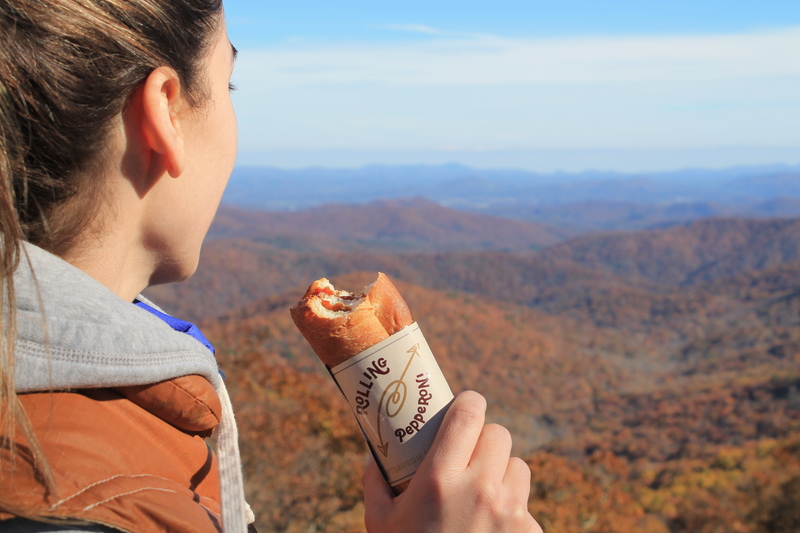 Rolling Pepperoni’s project is five tiered. The first tier is purchasing industrial baking equipment. The second tier is moving Rolling Pepperoni from Piebird’s shared space at 5304 Butler St. to a full-scale pick-up bakery at 6140 Butler St. The third tier is hiring a bakery manager to increase efficiency and opportunity. The fourth tier is broader marketing throughout Pittsburgh to bolster brand recognition and sales. The fifth tier is storefront renovations to attract attention to the new bakery with it’s highly trafficked location. Successful implementation of all five tiers will increase efficiency, diversify production, increase the quality of packaging to send fresher pepperoni rolls further as RP’s brand expands.

The new equipment Rolling Pepperoni is purchasing will improve the quality of the pepperoni rolls by making them consistently fluffier! The equipment also helps to bring down the cost per roll. Equipment that helps to regulate and speed up the process also allows us to make even more products including vegan-pepperoni rolls, pepperoni and cheese rolls, whole wheat rolls, salami croissants and more varieties of pickled veggie rolls. Creating a homebase for RP across the street from the 62nd Street Bridge on Butler Street will create an amazing presence for us. Moving into the new space at 6140 Butler Street will be able to offer fresh pepperoni rolls to the public.Traffic is driving through this intersection all day and is nose-to-nose traffic during rush hour. There is a parking lot for walk-ins and pick-up orders and would allow for so many more face-to-face interactions.There is nothing like a fresh pepperoni roll. Currently, people stop in to say they can smell delicious pepperoni rolls all down the block, but we are not coded for retail.

With all of the equipment comes the need for knowledgeable staff to manage the bakery production together. We’ll be able to attend more events, support more farmers markets, participate in more fundraisers and provide more for catering orders.

Right now, I do all of the print marketing work on my personal computer and so does Rolling Pepperoni’s Story Coordinator. This is worrisome since something could happen to these aging machines. Part of the loan would go to buying two computers to support our storytelling and give us extra capacity for in-house administrative efforts like invoicing, packaging and print marketing. To support RP’s growth goals we’re buying Port Authority Bus Tail Advertising Space to increase brand awareness for people on the go. We’re fortunate enough to have some amazing product shots by Chris Squier, photographer for both American Eagle and Anthropologie.

To really make Rolling Pepperoni’s new space pop on the far end of Butler, we’re repainting the exterior a beautiful jade green, installing planters with rhododendrons, installing a blade sign that juts out from the building so traffic passing can see it and hiring a WV folk artist to paint a mural on the side of the building where the parking lot is located. And last but not least, we’re hanging a big neon sign that says “Fresh Rolls” in the window so people that work at neighboring businesses or construction workers in the area know when we’re pulling hot rolls out of the oven. Upon approval, I’m seeking URA match funding of up to 50% for storefront renovations on a business corridor.

Below is list of our expected use of funds:

I come from a small town in the mountains - Elkins, West Virginia - to parents in the forestry and higher education sectors with extended family spread throughout Indiana. Initially, I went to college at West Virginia University to study industrial engineering. My experience studying industrial engineering taught me how to create efficiency of processes and procedures. At WVU, I also pursued a bachelor of science in psychology after experiencing a life event that heightened the importance of helping others.

Not fully satisfied with engineering or psychology, I transferred to Point Park University to study Sports, Arts and Entertainment Management and fell in love with Pittsburgh. It was the first time I’d lived in a city and was awed by the resources and opportunities. Pittsburgh can open so many doors that small towns, and even large towns, in West Virginia can’t. This disparity struck me.

In 2015, I was on my way to graduate school for dual Masters of Business Administration and Masters of Public Administration when I founded Rolling Pepperoni. I was inspired by an idea to harness both public good and self-sustaining product models to bridge the opportunity gap between urban and rural communities. Little by little, I have been growing my idea ever since. 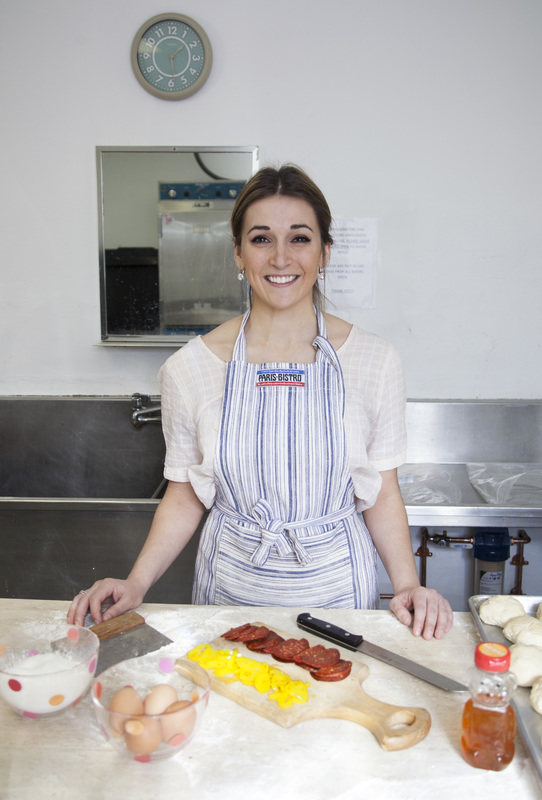 If you choose to invest, you will make a one-time investment via ACH that will be transferred to a secure escrow account. If the campaign successfully reaches its target, the funds will be distributed to Rolling Pepperoni LLC.

*Individual payments may vary slightly based on rounding. Potential repayments include principal and interest, they do not include the one-time fee which is assessed when you make your investment. These amounts are calculated as a fully amortizing loan: principal and interest are paid down starting with the first payment. There are no prepayment penalties and Rolling Pepperoni LLC. may pay down their loan early which may impact your earnings potential. Please note, returns are not guaranteed and investors could lose some or all of their investment.

Rolling Pepperoni LLC pays as agreed, you will receive quarterly payments directly into your bank account. In the event of a default, you will be contacted by the Administrative Agent to manage the collections process on investors' behalf.