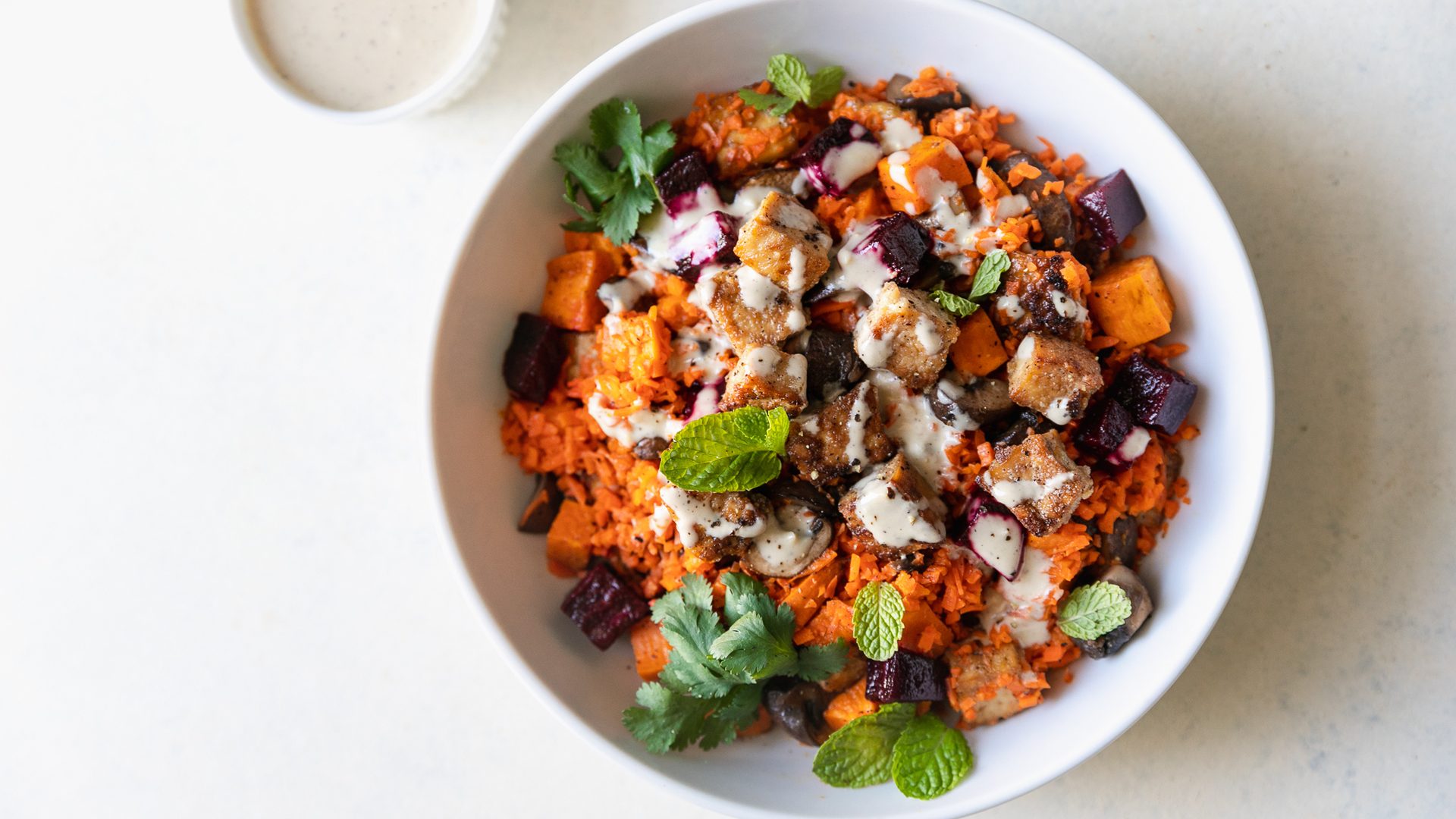 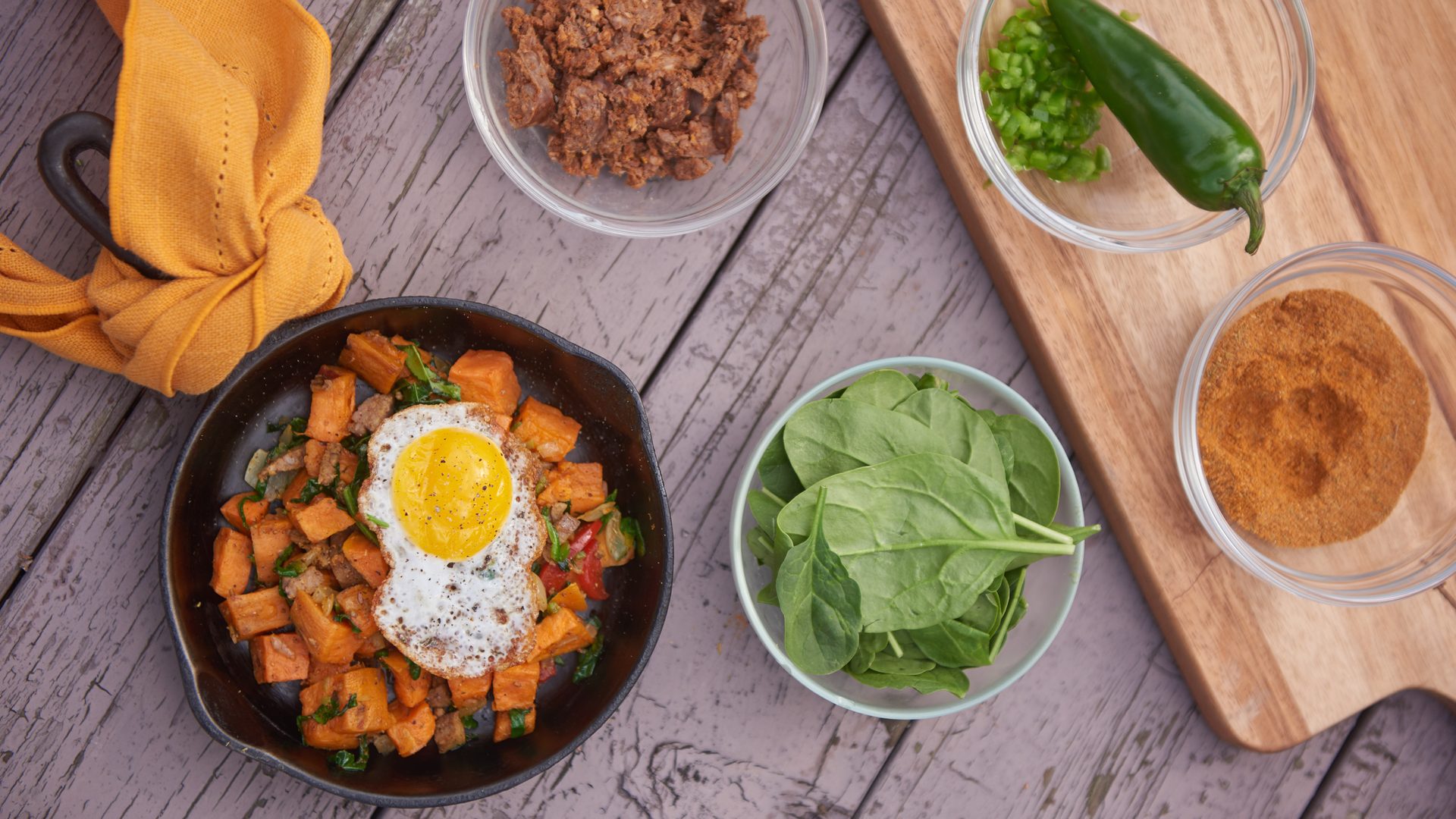 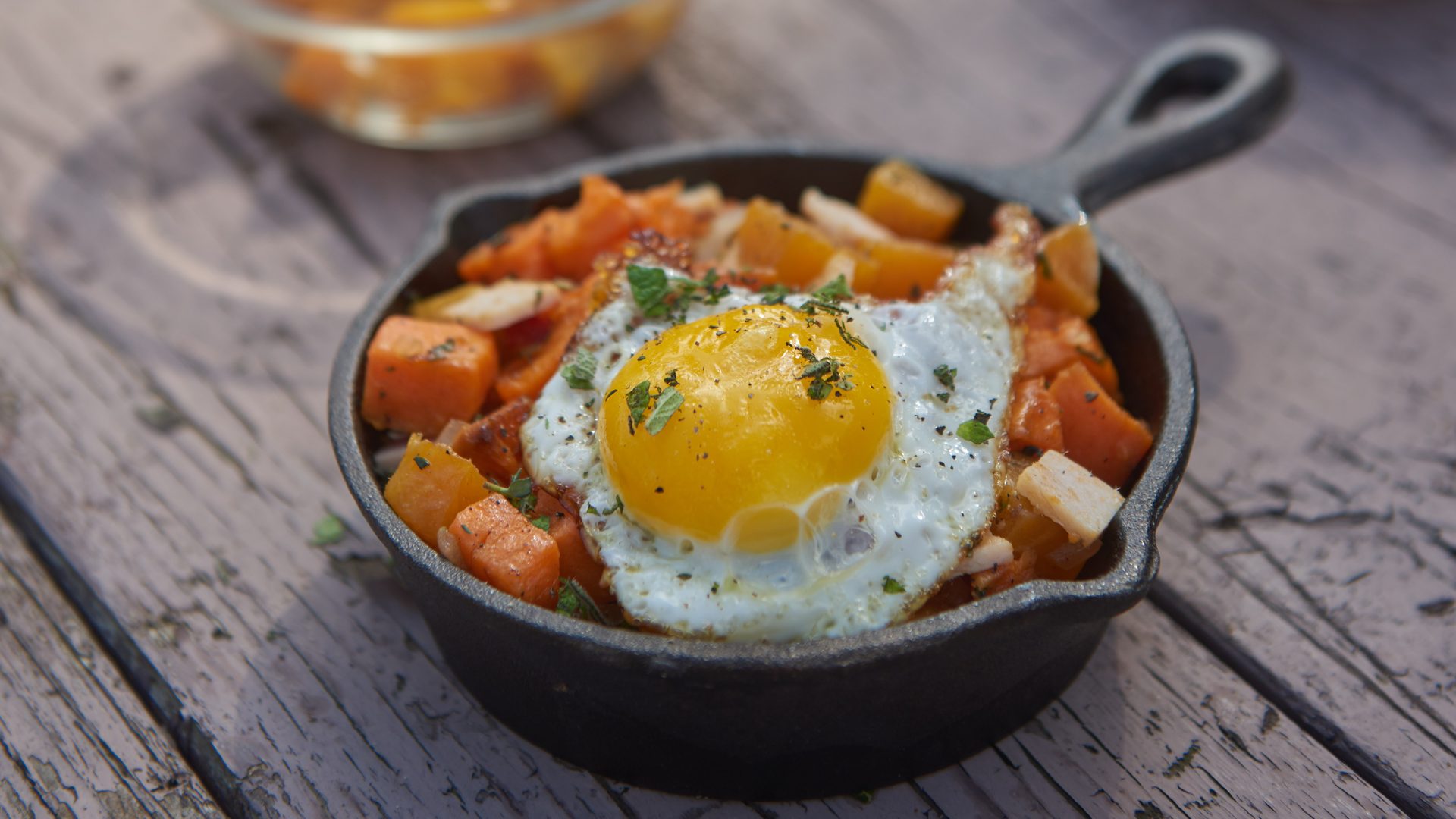 When it’s diced, it’s extra nice! Stone’s Throw Hash serves convenient, delicious hash bowls that are as good for the body as they are for the local economy. The hashes are what you crave any time of day, and are made with diced sweet potatoes mixed with fresh produce, unique seasonings, and great tasting proteins (like Spanish-style chorizo and Maryland Blue Crab). Best of all, everything in your bowl is sourced from farms only a stone’s throw away.

In order to increase our revenue and build resilience during COVID-19, we are focusing our efforts into frozen meals sold in grocery stores as well as e-Commerce.

We are looking to borrow up to $30,000 at an interest rate of 10.00%. The term includes a 3 month interest-only period, with a 57 month fully-amortizing period. 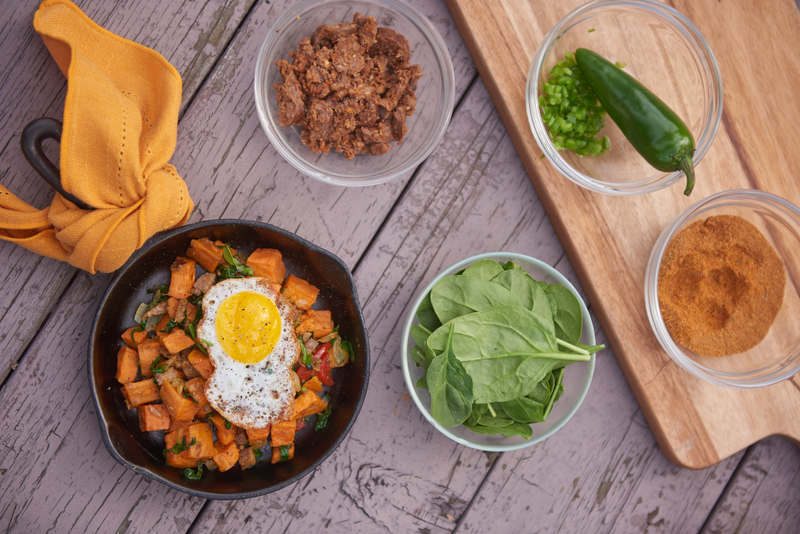 Our food is locally-sourced and environmentally sustainable.

We will be using these funds ($30,000) exclusively to launch our frozen products in grocery stores. The grocery funds will be used specifically for the following:

Working Capital ($21,000)- First we need to purchase ingredients and packaging for the first three months of operations totaling $15,000. Additionally we will need $6,000 in labor costs to manufacture the products. All of these costs are incurred prior to receiving any proceeds from grocery stores.

Other Set Up Costs ($9,000) – These funds will allow us to register our proprietary Spanish Style Chorizo with the USDA, purchase equipment to make the products more efficiently (e.g., vacuum sealing equipment), secure space in the USDA manufacturing facility, and obtain additional state and local health permits to sell products across all of Maryland, Washington D.C. and Virginia. 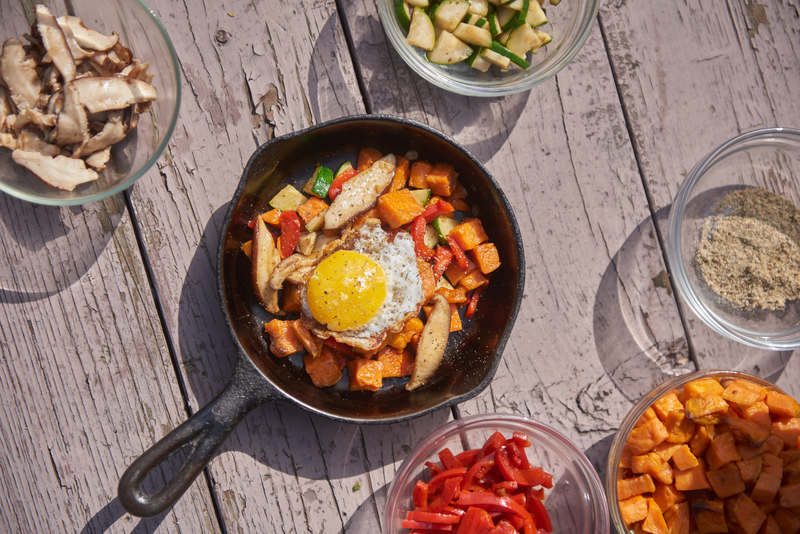 Selling through grocery stores will allow customers to buy our products during COVID-19 and beyond.

Once implemented, grocery stores and coffee shop distribution will drive an estimated 10,000 incremental hash sales in the first three months alone (July through September) with a 30% or greater gross margin (depending on the flavor). As distribution continues to grow in 2021 into the greater Mid-Atlantic and East Coast in 2022, we will be a multi-million dollar a year company by 2022. 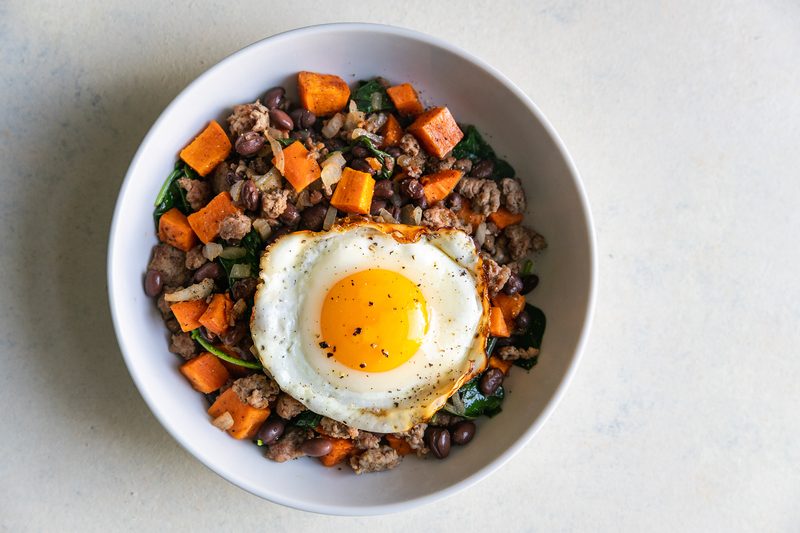 Coming soon to grocery stores: favorites such as our Chor-Iz-Good hash.

Inspired by a Sustainable Food Systems course taken through Tufts University Friedman School of Nutrition Science and Policy, our founder Ben James knew that any food business he started would have to be locally sourced and environmentally sustainable. Around the same time, Ben discovered he was allergic to wheat. Out of necessity, Ben started experimenting with different recipes at home and hit on a winning combination: protein-rich, flavor-packed hashes. Stone’s Throw Hash combines his passion for growing local food consumption with a desire for delicious, gluten-free, paleo-friendly all-day nourishment. 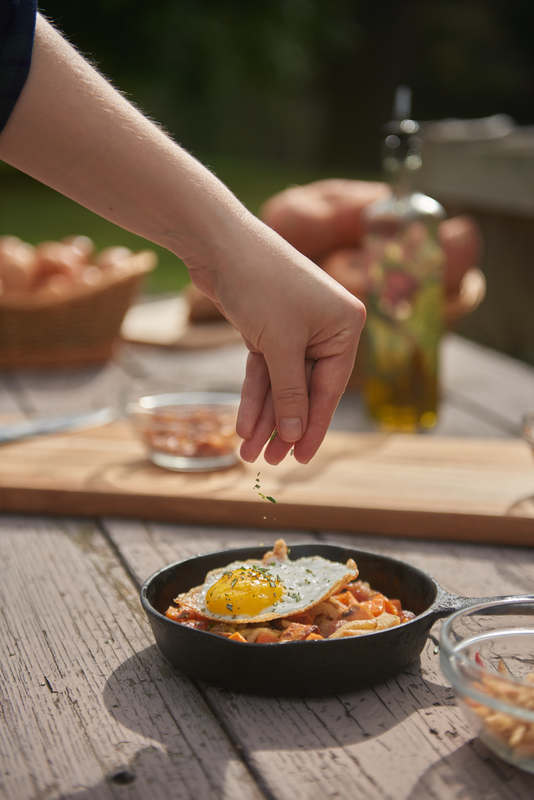 Our hashes are gluten-free, paleo-friendly, and packed with protien!

Stone's Throw Hash started operations in May 2019 with a tent and flat top grill at local farmers markets and pop ups throughout Baltimore. We grew to have a food truck in September and further expanded distribution through coffee shows and Crossfit gyms in late 2019 and early 2020.

In November, we were accepted into the Loyola Baltipreneurs Accelerator program. The program helped us optimize our operations with our food truck and catering business, and detail a launch plan and manufacturing facility for our upcoming grocery product launch. In just 9 months, we have sold over 7,000 hashes and we’re expecting accelerated growth in the summer and fall. 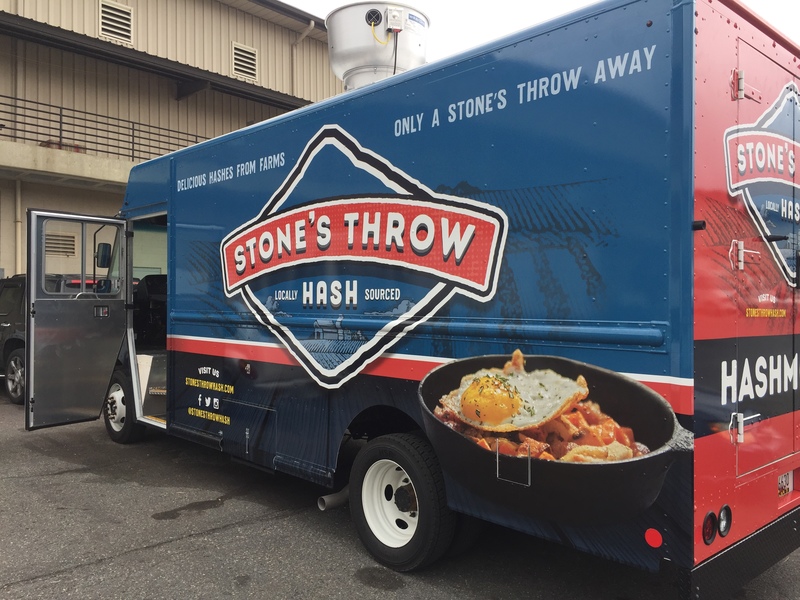 Our food truck is one of many sources of revenue.

We are now looking to the next step of our growth: frozen hash bowls. These turbulent times with the COVID 19 pandemic underscore the importance of our strategy to expand into grocery stores and e-Commerce. In fact, consumer packaged goods sales increased by $8.5 Billion over the past two weeks according to recent studies by Nielsen. We are poised to see significant growth in these segments and joined the Union Kitchen Accelerator Program in April to launch frozen hash bowls for consumers to take home with them and cook themselves. The bowls are all high in protein and fiber, gluten-free, and locally sourced. We will also be focusing on expanding our coffee shop distribution throughout Washington D.C. and Baltimore. With the help of Union Kitchen and their team, we will be selling thousands of hashes each week across Washington D.C. and Baltimore by the summer of 2020.

With this new growth, we will also directly impact both the Washington D.C. and Baltimore economies as well. Stone's Throw Hash will be giving 1% of revenue back to local farming initiatives each year, and in 2020 will be supporting the Farm Alliance of Baltimore. Additionally we currently employ two cooks in Baltimore and will be expanding our staff with this expansion by another two additional employees in the summer and fall.

After rolling out in regional grocery stores in 2020, we will expand throughout the Mid-Atlantic and up and down the eastern seaboard in 2021 and 2022. 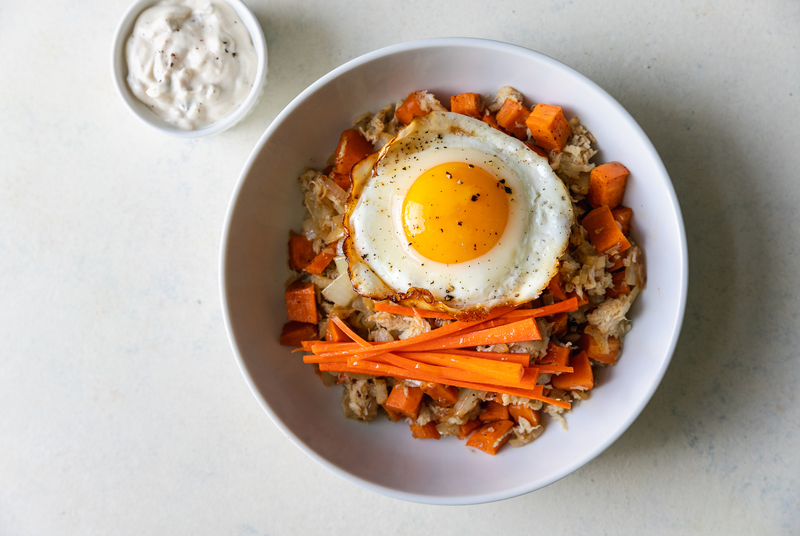 A Baltimore favorite: the Bay Be Blue Crab. 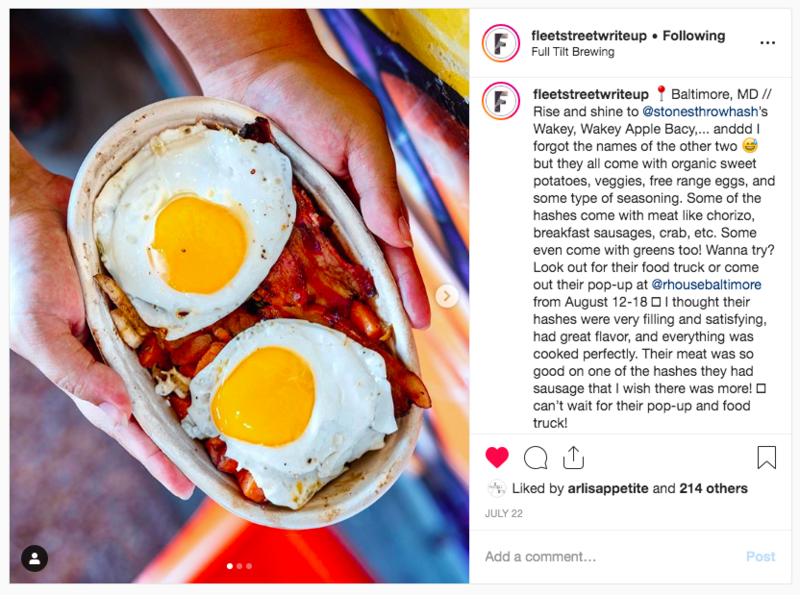 A rave review from Fleet Street Write Up.

We have a truly disruptive and innovative business model unique to the food industry. Large food manufacturers rely on their lengthy centralized supply chain to make their products. We, on the other hand, will set up strategic regional manufacturing hubs with local and regional suppliers to be faster to market and more agile to regional market needs.

In addition, the path to market will be much more efficient and have a higher success rate than that of our larger food manufacturing competitors. The food truck and farmers market segment of the business serve as a unique insights and marketing tool to inform and drive the grocery stores and coffee shops business. For example, we can see the real-time sales at farmers markets and food trucks to determine which flavors to launch in grocery stores. This takes out the guesswork of new product launches and turns research, which is typically an expense, into a revenue driver. 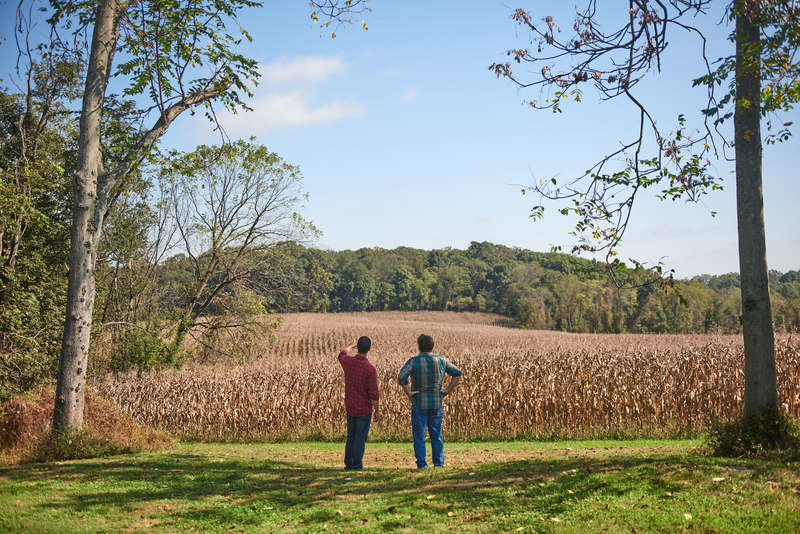 All of our food is sourced from local farms just a stone's throw away.

Ben James is the CEO and Founder of Stone's Throw Hash. Before founding Stone's Throw Hash, Ben worked for 6 years in a number of brand management roles at Nestle Purina Petcare and Ocean Spray Cranberries. He also earned his MBA from Washington University in St. Louis and has extensive additional experience in marketing, including digital advertising and event and sports marketing. Ben is passionate about local food, a father of two, and an avid fly fisherman and outdoorsman! 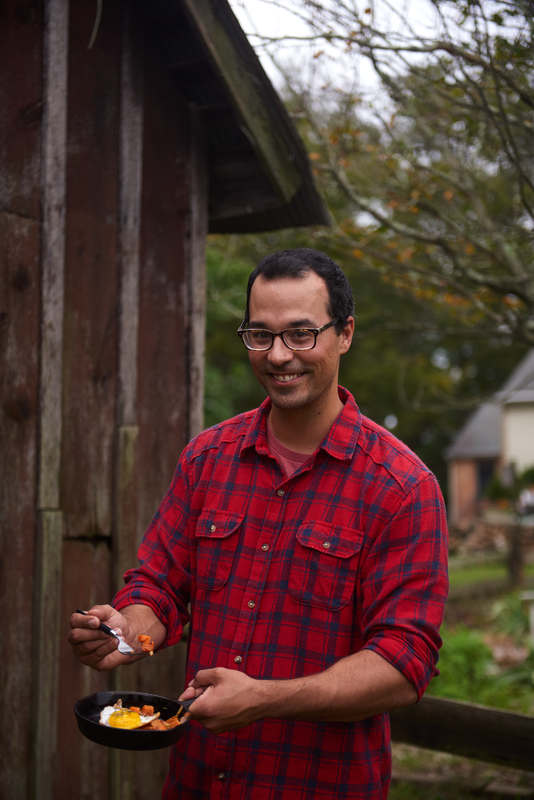 If you choose to invest, you will make a one-time investment via ACH that will be transferred to a secure escrow account. If the campaign successfully reaches its target, the funds will be distributed to Stone's Throw Hash, LLC.

Your ongoing responsibilities from investing are very limited. Over the life of the loan, you will receive a yearly 1099-INT, which is a simple tax document similar to what you receive for most savings accounts.*Individual payments may vary slightly based on rounding. Potential repayments include principal and interest; they do not include the one-time fee which is assessed when you make your investment. These amounts are calculated as a fully amortizing loan, which means that principal and interest are paid down starting with the first payment. There are no prepayment penalties and Stone's Throw Hash, LLC may pay down their loan early, which may impact your earnings potential. Please note, returns are not guaranteed and investors could lose some or all of their investment.

Stone's Throw Hash, LLC pays as agreed. You will receive quarterly payments directly into your bank account. In the event of a default, you will be contacted by the administrative agent to manage the collections process on the investors' behalf.