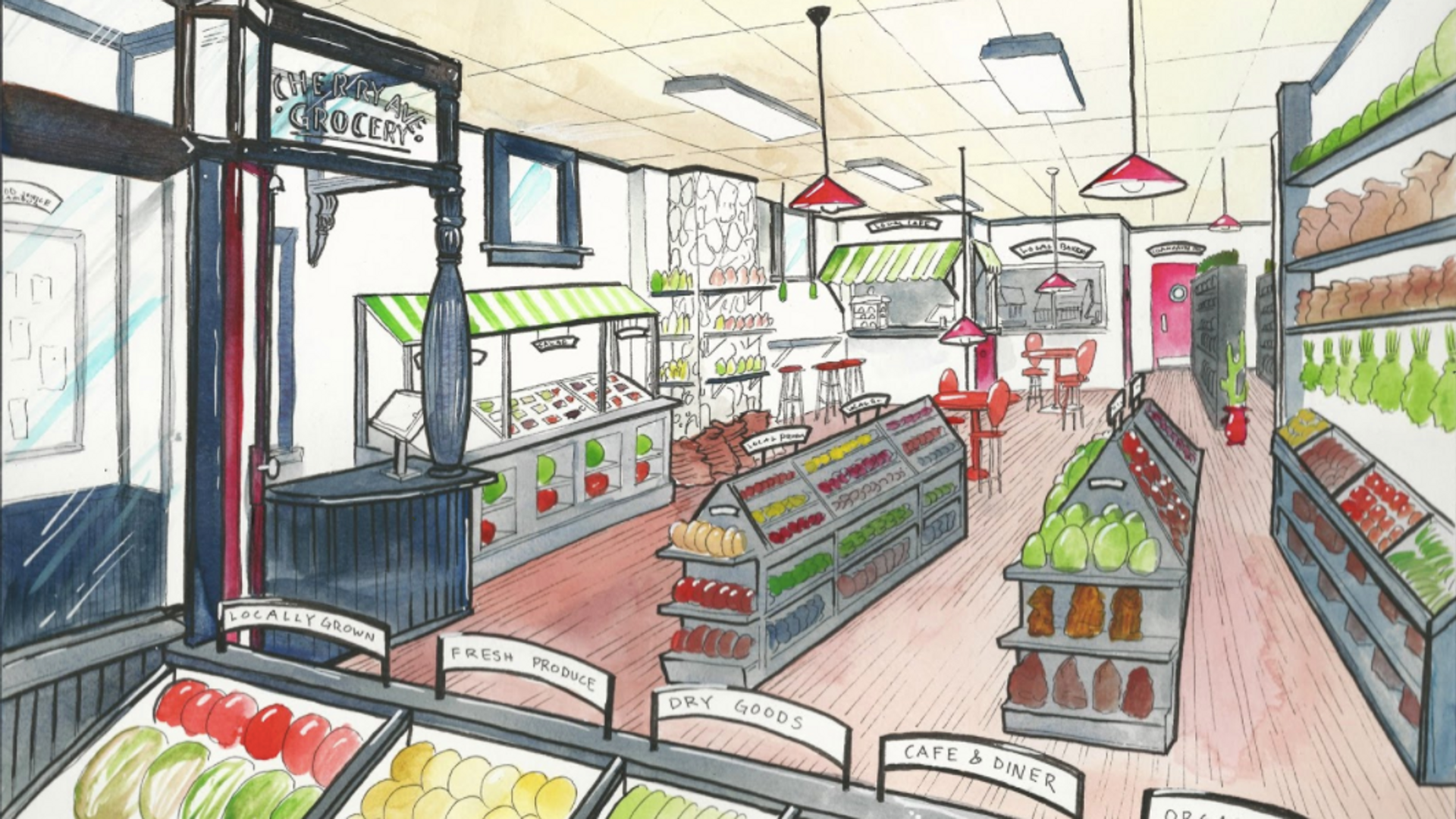 StarkFresh is a small but mighty 501(c)3 nonprofit located in Canton, Ohio and servicing Stark County, Ohio. Our mission is to tackle the causes of hunger by creating realistic pathways out of poverty. We envision a Stark County where a culture of healthy eating creates people who are healthier as well as communities that are rejuvenated and empowered. We are connecting growers, consumers, and producers to help create a food system that focuses on making locally-sourced, nutrient-dense, and affordable foods available to everyone in Stark County. We support learning and teaching opportunities that promote the growth, use, and sale of local foods and assist in the growth of urban agricultural employment.

We are looking to borrow up to $50,000. The annual interest rate includes a 3.75% interest-only period followed by a 30-month fully amortizing period repaying at 7.00% interest rate.

How You'll Help During COVID-19

Specifically, the funds will be used get the store up and running. With the onslaught of COVID-19, funding that was expected has been put on pause. The funds being requested are for the remaining items needed to get the store open. Much of the building work has already been completed.

$30,928.66 is for the purchase and hookup of walk-in coolers, freezers and outside dry grocery storage as well as the retail refrigeration and freezer units inside of the store.

$4000 is for the initial inventory to fill the store and

$3,190.04 will be used for purchases of consumables and things like uniforms for the employees. An additional $11,267 will be used to cover a month deficit until sales are enough to cover expenses.

This Neighborhood Grocery Store has been years in the making, knowing that fine-tuning the Mobile Grocery Market and adapting it to a brick and mortar operation would be a logical next step. Location was always a concern when thinking of this adaptation and being able to be in the heart of the heaviest foot-traveled portion of the city of Canton is absolutely ideal. The opening of this store will allow for healthy growth and to begin being profitable within 1 year, which is more than half the time of the industry-standard of 2.5 years. In addition, the revenue from the store helps assist with funding other StarkFresh programming, that doesn't have a revenue source of its own.

Investing in this store will allow the breathing room needed to fine-tune the store operations and complete a blueprint for additional stores to be built in neighborhoods of need.

There are several programs that we currently run that advance us towards the goal to create an overarching, integrated solution to the problem of increasing fresh, nutritious food access & consumption in chronically under-served neighborhoods throughout the County.

StarkFresh operates nearly 7 acres of farm sites within Canton, Ohio using 100% volunteer labor. On our Teaching Farm, Training Farm, and Cooperative Farms, produce is currently grown for our Mobile Grocery Market. In the past 6 years, this program has been able to provide 367,448 servings of food to 6674 individuals across 75 stops, equating to roughly 65,547 of fresh, affordable food items that were sold. The Mobile Grocery Market travels throughout the county and delivers produce and groceries to senior housing complexes, public housing authority properties, public services centers, permanent supportive housing as well as places that are considered food apartheids where there is little to no access to fresh, healthy food for sale.

Food from the farms also will be sold at our newest endeavor, to build a working model of a nonprofit neighborhood Grocery Store. Mirroring the success of the Mobile Grocery Market model, this brick-and-mortar version of a Grocery Store will be housed within the Food Justice Campus, which contains Shared Commercial Kitchen and Office spaces as well as the Food Incubation Center for small food business startups. Located less than 2 blocks from the County's main bus terminal, where 150,000 people travel through monthly, this store model will create a blueprint for other neighborhood grocery stores in areas that need it most, proving that bigger does not always mean a better solution.

An investment in StarkFresh is an investment in obtainable, real-world solutions to deeply-rooted problems. Traditionally, for systematic change to take place, drastically different approaches to problem-solving must be taken. We do this, and we do it better than others, as we are not afraid to think outside the box to look for solutions.

StarkFresh has been around in various standard community development roles in northeast Canton, Ohio since 1983, but didn’t really start using the name StarkFresh until 2012 when we made the decision to start tackling the root causes of poverty and hunger throughout the community. We noticed that there are large groups of people without access to nutritious food and if they do have access to this food, then they seem to be lacking the knowledge to cook the food. In addition to folks not knowing how to grow food on their own, there are entirely too many hungry people living in poverty.

When transitioning fully into StarkFresh, there was a deliberate slow start in order to find out what the community truly was in need of and which approaches would be the most effective. This approach has allowed time to adapt and change programming over time to increase overall community impact. As the programming has matured, the mission has continued to be better defined, reflecting the increasing impact of the work being done.

Cost of Poverty experience to showcase hurdles to escaping the cycle of poverty.

Many factors contribute to the state of hunger in the United States. The causes are complex, varied, and extremely interconnected. Because of this, hunger and poverty are inextricably linked. Not every poor person is hungry, but almost all hungry people are poor. Millions live in hunger and are malnourished because they cannot afford to buy enough food, access more nutrient-dense foods, or afford the supplies they need to grow their own food.

Hunger should be viewed as a dimension of extreme poverty. It should be considered as the most severe and critical symptom of poverty. Poverty causes hunger, and hunger, in turn, contributes to poverty. It is a vicious cycle that is quite difficult to break free from once you are stuck inside. Understanding that there are many causes of hunger, we focus on ten individual causes of poverty. Identifying and dealing with these causes of poverty allows for a more streamlined approach to tackle these causes of hunger. In Stark County, poverty and hunger are very much a reality for large groups within our community. StarkFresh was formed as a direct response to these conditions.

As StarkFresh continues to transition our programming to tackle root causes of hunger and poverty, there will be further expansion of Mobile Grocery Market offerings and Neighborhood Grocery Stores throughout Stark County. Having programs like these that not only are self-sustaining, but also profitable, will create less of a need to rely on the philanthropy community and be able to create programs that can be duplicated throughout the county, in different neighborhoods.

Within the next 3 years there will be at least one new neighborhood grocery store in another park of the County, utilizing the blueprint created from this working neighborhood Grocery Store model. When this mode of expansion starts, we will again transition to be able to act as a supply chain for these smaller stores, utilizing nearly a decade's worth of knowledge in the low-income food access sector to obtain food at affordable rates and pass those savings on to the general public.

About the Executive Director

Tom Phillips is the Executive Director of StarkFresh. He comes from an executive background in the for-profit workplace, spending 10 years as Vice President of an Energy Services Company in his home state of Connecticut.  Since coming to StarkFresh as an AmeriCorps VISTA in 2014, his drive to push the status quo and not take a “NO” as an answer has allowed StarkFresh to lead local food insecurity efforts.  Tom’s leadership has taken StarkFresh from a fledgling backyard gardening program and turned it into an organization that boasts an 8,500 square foot Food Justice Campus, over 6 acres of urban farms and a fleet of vehicles to support their Mobile Grocery Market program. Tom is a father to five children and spends his spare time going on adventures with his fiancé, yard farming, playing board games and doing research on subjects he is passionate about.  He lives in Canton, OH on his urban homestead.

If you choose to invest, you will make a one-time investment via ACH that will be transferred to a secure escrow account. If the campaign successfully reaches its target, the funds will be distributed to StarkFresh.

*Individual payments may vary slightly based on rounding. Potential repayments include principal and interest; they do not include the one-time fee which is assessed when you make your investment. These amounts are calculated as a hybrid interest-only + amortizing loan, which means that there is a specified interest-only period followed by a an amortization period. There are no prepayment penalties and StarkFresh may pay down their loan early, which may impact your earnings potential. Please note: returns are not guaranteed and investors could lose some or all of their investment.

Your ongoing responsibilities from investing are very limited. Over the life of the loan, you will receive a yearly 1099-INT, which is a simple tax document similar to what you receive for most savings accounts.

StarkFresh pays as agreed. You will receive quarterly payments directly into your bank account. In the event of a default, you will be contacted by the administrative agent to manage the collections process on the investors' behalf.

Honeycomb charges StarkFresh a $100 posting fee and a 6.0% loan origination fee on the total amount funded.