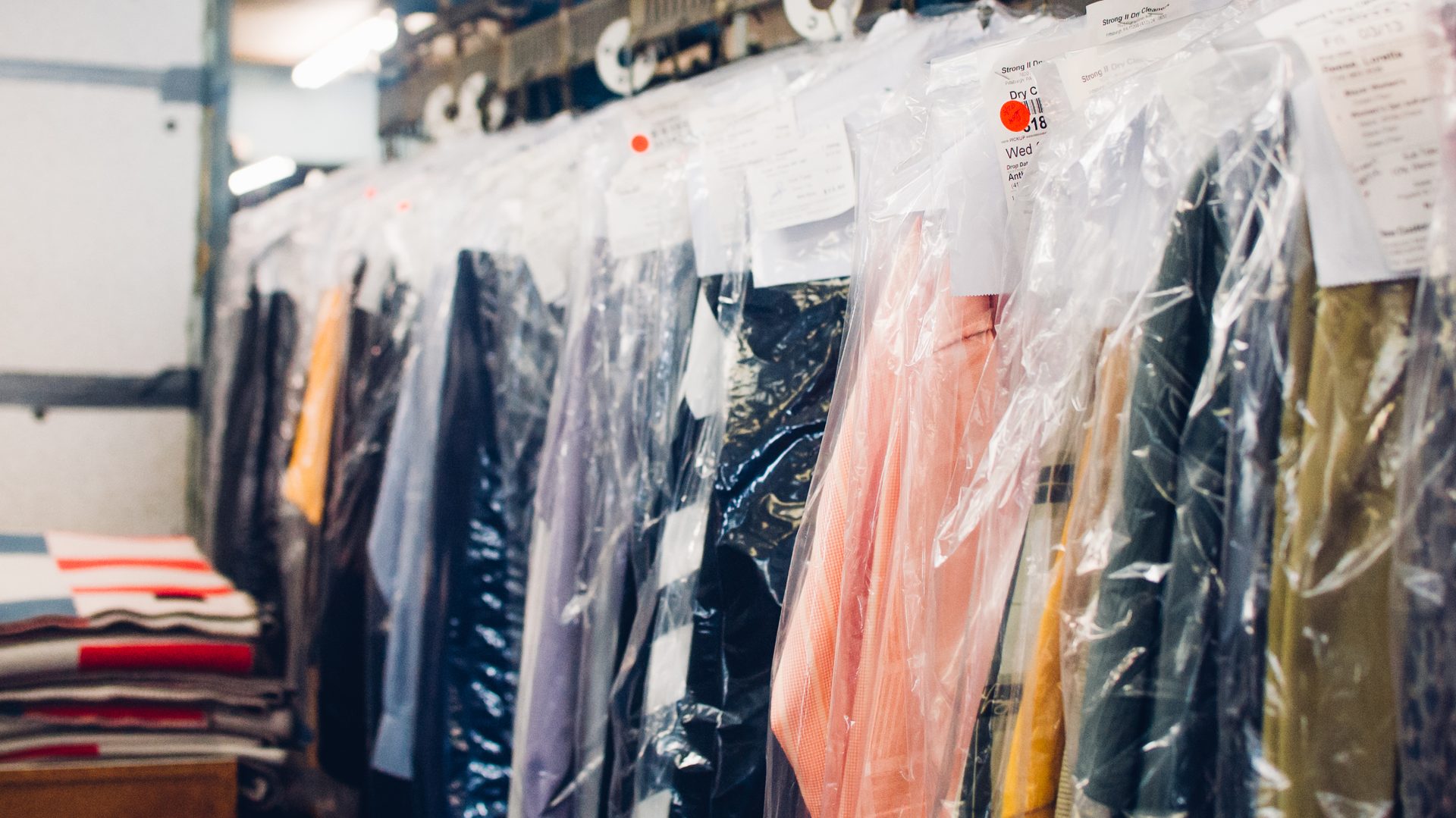 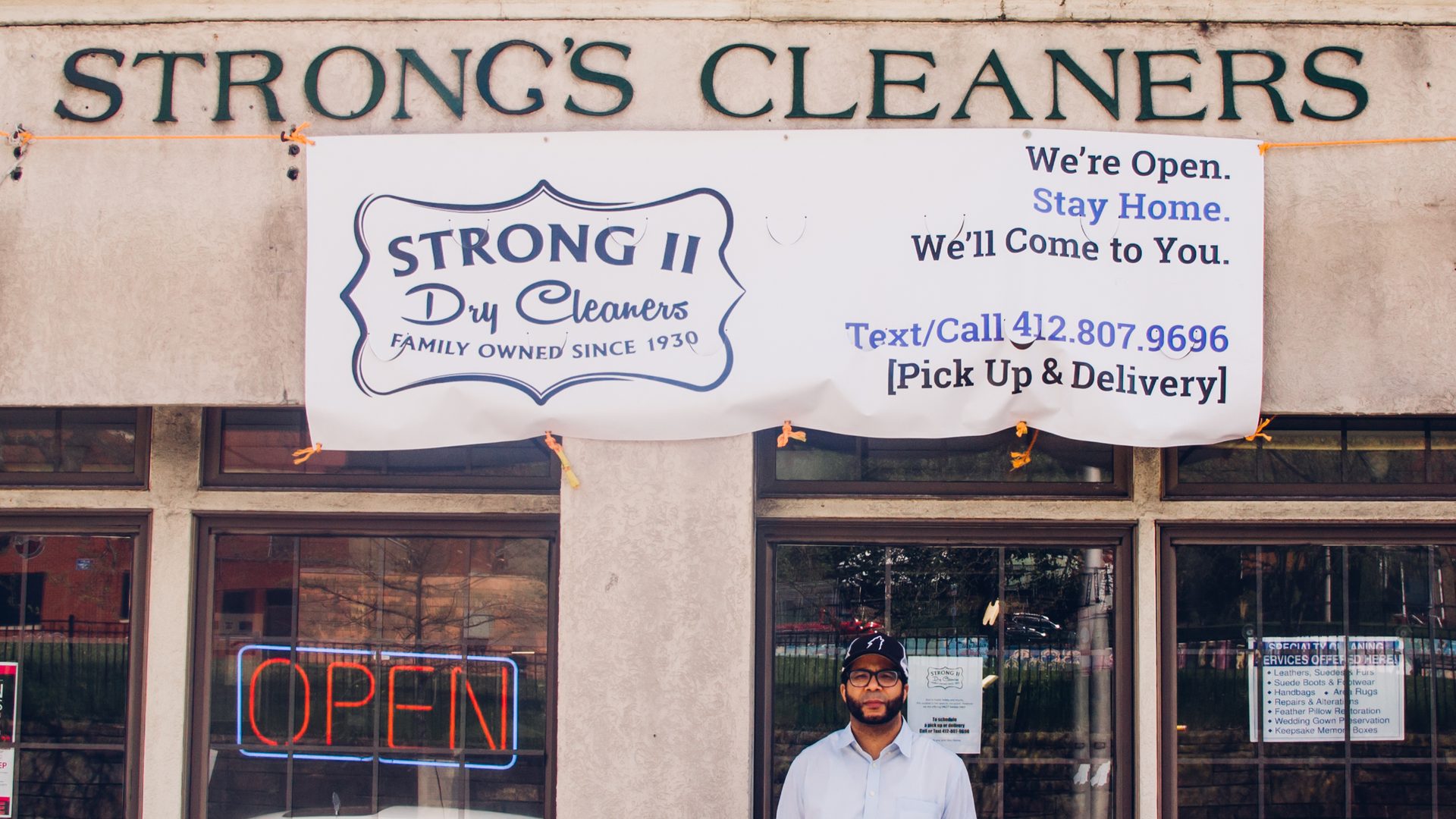 90 Year Strong, Black Owned Business is Ready to Scale Up: This is not just a dry cleaning business; this social entrepreneurship is defined by its cultural impact. Strong II Dry Cleaners, LLC (dba Strong’s Cleaners) is a 90-year-old Black, family-owned fabric care business that is currently owned and operated by Justin Strong, serial entrepreneur and cultural influencer. The business is located in a family-owned commercial property, in a slowly-gentrifying, historically African American neighborhood called Homewood in Pittsburgh, PA. They also have a “drop-store” located in the Grant Building, in the heart of Downtown Pittsburgh, which is managed by a separate company.. Strong’s Cleaners is ready to scale up its reliable business model - which currently serves generations of residents and a strong roster of major universities such as the University of Pittsburgh and local businesses such as the Ace Hotel Pittsburgh - to upgrade capacity to allow for a medical-grade cleaning process. The medical industry is dominant in the region, and current events indicate that the need for medical cleaning services is only on the rise and an essential element of public health and wellness. Strong’s Cleaners is well situated to meet this need. It continues to grow its reputation as the supply side of regional dry cleaners close their doors for good.

Nuts and Bolts: Strong’s Cleaners provides dry cleaning, laundry service, leather and suede cleaning, and alterations & repairs. In the COVID-19 era, the cleaners is one of a handful of businesses deemed "essential". The company provides brick and mortar retail services, as well as valet pick-up and delivery to its diverse roster of local and regional institutions that serve thousands of professionals, students, workers, and tourists every day. Its mission is to provide quality fabric care service with an emphasis on building a network of trust among its customers. The company specializes in dry cleaning and laundry service, with a target demo of patrons ages 25 - 70, who live in and/or work in the city of Pittsburgh and its first ring of suburbs. Strong’s Cleaners views each garment as playing an important role in the customers’ lives. If a garment is prepared in a timely manner with superior quality, there is a potential to produce a “domino effect” of positive consequences in the customer’s day, whether for a job interview, an important professional meeting, or a night on the town. This is viewed, not as a risk, but as an opportunity to impress upon its clientele just how significant presentation of self through uniform can be towards actualizing, and maintaining personal and professional goals. 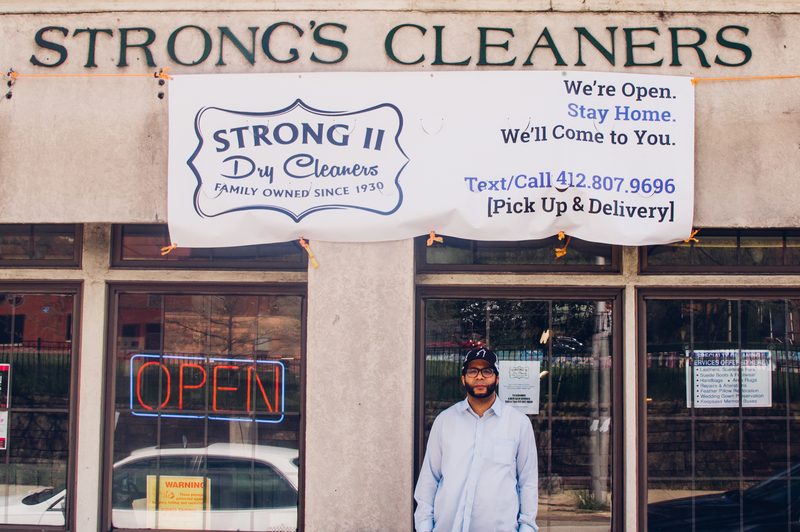 First $10k will be used to upgrade the facility to handle an increase in medical uniform cleaning needs. This includes hot water heater capacity, an additional 26lb washer, and chemical supplies to confidently clean items; plus the cost of installation.

Remaining $15k will be used to reach a settlement deal with the current equipment leasing company to payoff remaining balance at a reduced amount. This will save roughly $5k and eliminate a monthly debt payment of $503.

This pandemic has affected the core structure of how the company operates on a day to day basis. One consumer behavioral attribute that has opened itself up to change is consumer expectations. Strong’s Cleaners will limit its in-store hours, and push its valet service. Along with running a more efficient plant operation schedule, and the potential of buying out the predatorial equipment lease, the company will show a healthier & improved P&L and Balance Sheet.

A successful crowdfunding campaign will position the company to take on more commercial contracts in the medical field and compete in a growing market for medical grade uniform cleaning services. This will allow the company to, not only bring back lost jobs, but to add to its employee roster. 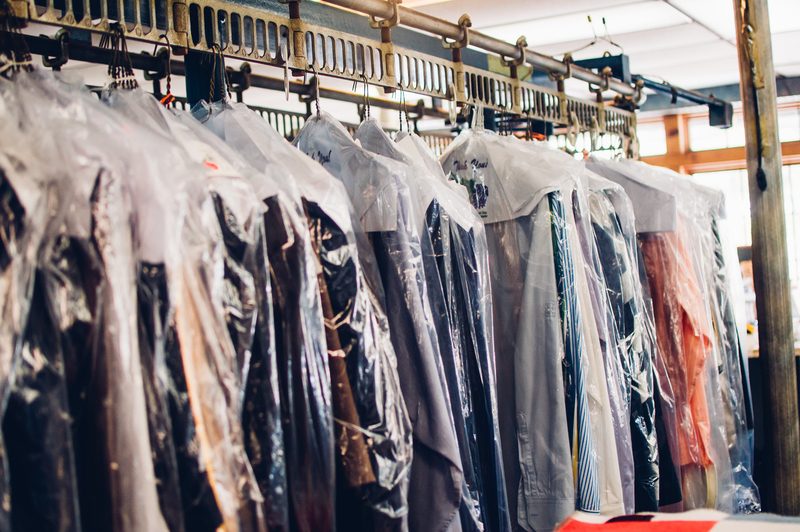 Dennis Strong (current owner Justin Strong's Grandfather) started Strong’s Cleaners in 1930, at the age of 19, in Shelby, North Carolina. The family relocated North to the Pittsburgh Area in 1942. That year, Strong Cleaners began its Pittsburgh journey in Homestead. Shortly after, the business opened a 2nd store in Braddock. Eventually the Homestead location closed, leaving only the Braddock plant. Over the decades Strong Cleaners was one of the three main Black Owned dry cleaners in the Pittsburgh Area, along with Pryor's (Hill District) and Trower's (Homewood).

In 1987, after being laid off from US Steel a few years prior, Eric Strong (Justin's Dad) bought the family business off his Dad, and took over operations. In 1991, Strong's Cleaners, purchased Trower's Dry Cleaners in Homewood, and relocated the business from Braddock. Over the following years, the business tried various attempts to expand its market beyond the Homewood neighborhood, which was experiencing population and small business loss due to gang violence and overall disinvestment from the City. In 2007, the company opened a "drop store" in the Forest Hills area of the City and grew its commercial contracts.

After the closure of the now famed live music venue, The Shadow Lounge (2000-2013), Justin Strong eventually found himself back at the family business helping navigate the future of the cleaners. In 2014, the new ownership group, Strong II Dry Cleaner, LLC was formed, with Justin as majority owner. In an effort to diversify its cash flow (at that time 50% of revenue came from 1 commercial client), Justin opened a drop store in Downtown Pittsburgh, May 2015. Unfortunately, less than 2 months later, that One commercial contract was canceled on a 4 days notice, putting the business in jeopardy. Through a series of short term loans, and closing the Forest Hills location, while focusing on the Downtown market, the company was able to right the ship over the next 4 years.

In June of 2019, the business sold the managing rights to the Downtown location to 111 Enterprises which operates the business under the Strong II Dry Cleaners brand, and runs both stores' Valet Business. This move has resulted in recorded sales at the Downtown Location, and allowed for stronger quality control coming out of the plant in Homewood. 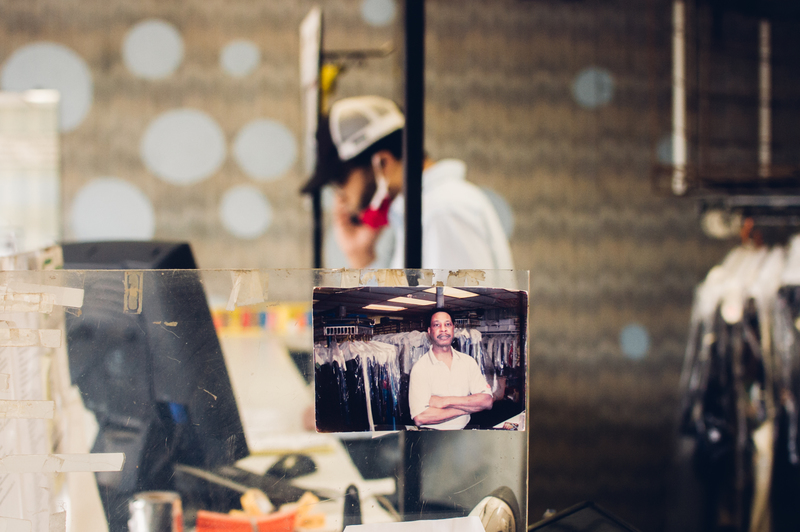 April 2020 marked the family business' 90 year anniversary, and the COVID-19 Crisis has shed light on a new model of operations for the cleaners moving forward. The company sees its Valet (Pick Up & Delivery) Service and reduced storefront hours, as the future of the company. Prior to the pandemic, it has been no secret that the Dry Cleaning Industry has been in decline. Mainly made up of neighborhood "Mom & Pop" operations, many owners have been retiring and/or dying without any line of succession. As the demand has been decreasing, the supply side has been shrinking faster. The business was planning its growth off of a consolidation of markets, paired with its quality service. The current lock down will accelerate that consolidation. Even as an Essential Business, the company is learning that it is one of only a few dry cleaners operating during the crisis. As a result new customers are giving Strong II Dry Cleaners a try for the first time. The COVID - 19 crisis has also opened an opportunity for the business to increase its capacity to process more medical grade items.

Once necessary upgrades are made to the plant, over the next 12 months, the company aims to secure new commercial accounts in the medical field. As a side effect of the Lock Down many dry cleaners will not be able to recover from the economic crisis, especially those who do not own their own building. Maintaining and upgrading equipment, training in quality control, exceeding customer's expectations, and timely valet service will be key. The next 2 years following will continue to grow its customer base through an increase in internet marketing, commercial accounts, and market consolidation. 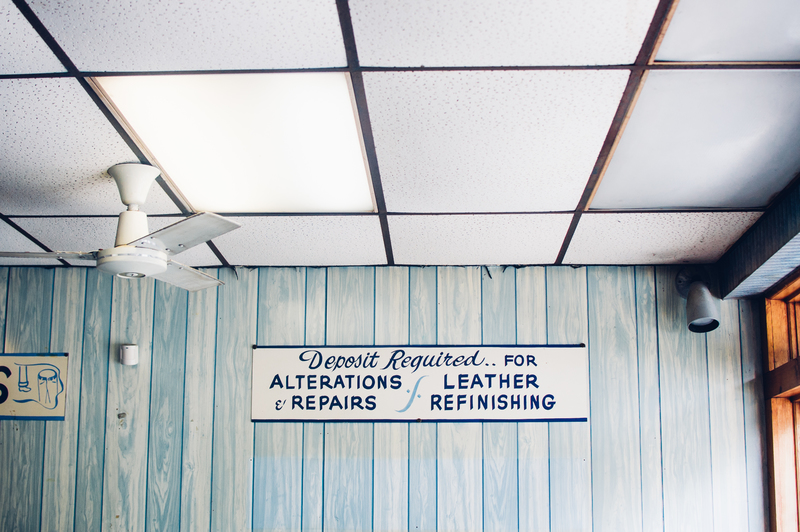 Strong’s Cleaners does not only sell dry cleaning and laundry service, but more importantly it sells Confidence. The confidence one gets when putting on a freshly cleaned and press outfit for the day. Whether that confidence is for a job interview, a first date post lock down, or lab coat on the front lines, any level of confidence in our daily lives is crucial right now.

From an investor’s standpoint, they can be confident Strong’s Cleaners will survive this current adversity, as it has others in the past. Strong’ Cleaners knows how to survive and adapt. It’s a story of an American resilience that encompasses the post-slavery promise of industrialization, deindustrialization, gentrification, and the essential service of a new regional industry of public health. Strong Cleaner’s is ready to amplify its leadership as a stalwart business in the Pittsburgh Metro Area. 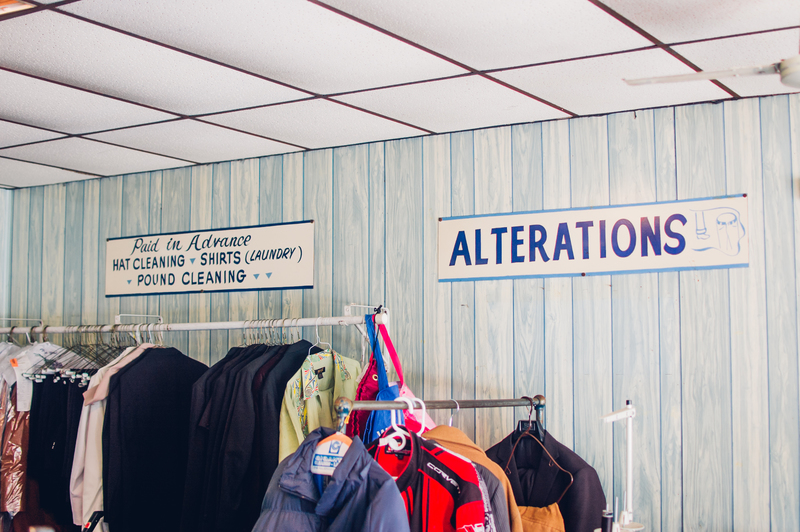 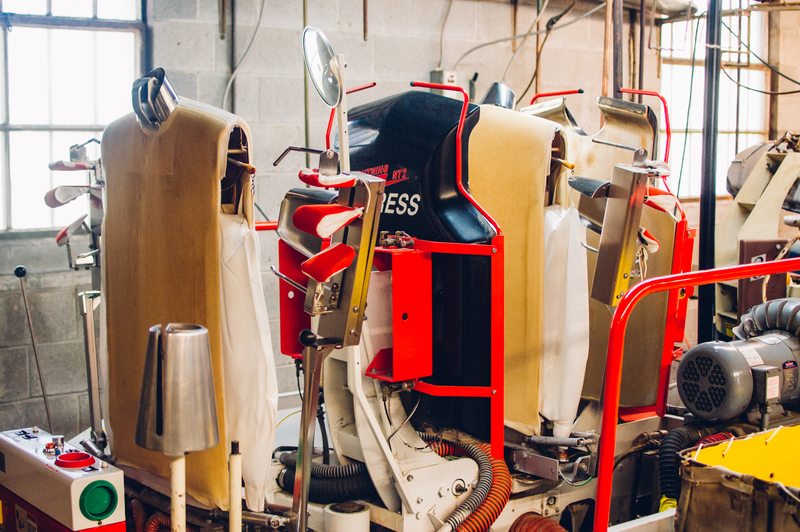 Justin Strong is the chief executive manager of 7th Movement Development, LLC, a Pittsburgh-based consultancy and development firm that advocates for inclusive economic and social progress through nightlife hospitality in the greater Pittsburgh region. Strong is widely known as the founder and former co-owner of the Shadow Lounge and AVA Lounge (2000–2013), performance venues and lounges that were located in the East Liberty neighborhood of Pittsburgh. Through the Shadow Lounge and AVA Lounge, Strong created and managed two of the most memorable and unique entertainment venues in the city for thirteen years. As a result, he is often described as one of the pioneers of the “New East Liberty.” In November 2014, Strong assumed ownership of his family’s third-generation dry cleaning and laundry company, Strong II Dry Cleaners, LLC, founded in 1930, with stores located in Homewood and downtown Pittsburgh. In November 2016, Strong returned to the nightlife industry as the general manager of Spirit, a bar and music venue in Lawrenceville, which receives local accolades year after year and made Esquire’s Best Bars in America in 2017. In the summer of 2019, Strong joined a local real estate development group as a consultant on a multi year project. At the start of 2020, he stepped down as general manager of Spirit after three years. 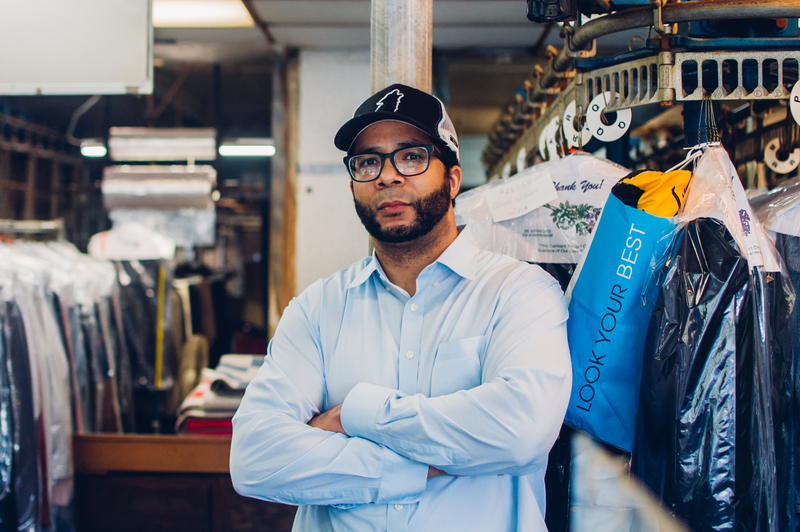 If you choose to invest, you will make a one-time investment via ACH that will be transferred to a secure escrow account. If the campaign successfully reaches its target, the funds will be distributed to Strong II Dry Cleaners LLC.

Your ongoing responsibilities from investing are very limited. Over the life of the loan, you will receive a yearly 1099-INT, which is a simple tax document similar to what you receive for most savings accounts.*Individual payments may vary slightly based on rounding. Potential repayments include principal and interest; they do not include the one-time fee which is assessed when you make your investment. These amounts are calculated as a hybrid interest-only + amortizing loan, which means that there is a specified interest-only period followed by a an amortization period. There are no prepayment penalties and Strong II Dry Cleaners LLC may pay down their loan early, which may impact your earnings potential. Please note: returns are not guaranteed and investors could lose some or all of their investment.

Strong II Dry Cleaners LLC pays as agreed. You will receive quarterly payments directly into your bank account. In the event of a default, you will be contacted by the administrative agent to manage the collections process on the investors' behalf.