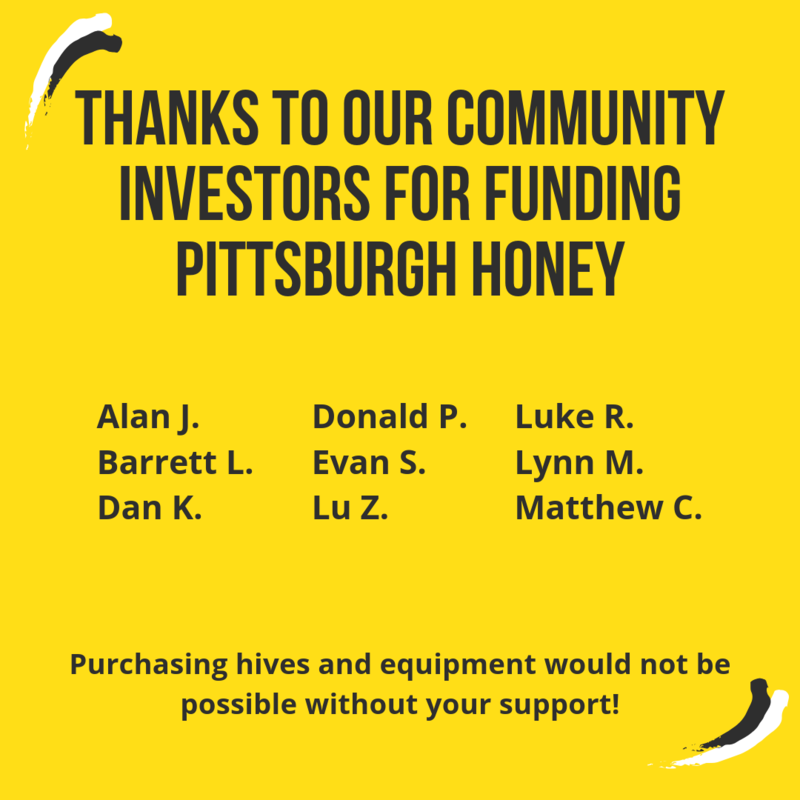 Pittsburgh Honey is a producer and supplier of pure and local honey and a variety of handcrafted honey and beeswax products including a line of skin and beauty products.

Located on Squirrel Hill’s Murray Avenue, the business is looking to purchase additional hives and equipment in order to expand their honey production to meet growing demand, make initial purchases from other Pittsburgh beekeepers to inaugurate the Pittsburgh Honey Cooperative, and to install additional storefront signage.

Pittsburgh Honey intends to purchase approximately 50-60 “nucs” (the nucleus, or beginnings of a hive system) in order to double their honey production this season. Depending on availability, they may purchase more, noting that each nuc must go into either seasoned or newly prepared woodenwares, which include: hive boxes, internal frames and foundation, as well as ancillary items like queen excluders, covers, bottom boards, feeders and screens.

This increased production will allow Pittsburgh Honey to meet the increasing retail and wholesale demands for their pure and local honey, as well as seek out new markets — from the Wholeys kiosk at PPG Paints Arena and Pittsburgh International Airport, to fulfilling requests from Ohio-based Whole Foods Stores and other retailers — all while ensuring full shelves year-round for their local customers at their Squirrel Hill location.

While Cooperative partners may choose to still sell some of their honey on their own, Pittsburgh Honey intends to purchase their remaining harvest, from initial extractions to smaller overages, for use in the Ultra Local program. Finally, where unique homogeneous varietals exist, Pittsburgh Honey can incorporate Cooperative product into sales to their wholesale distributors.

Finally, Pittsburgh Honey may upgrade their signage at their Squirrel Hill retail store by introducing a large, three-dimensional honeybee attached to a flexible, cantilevered mount that will waggle about just above their storefront.

Al Fine's interest in beekeeping began when he was just a young boy. One summer, a swarm of honey bees landed on a tree branch in the family's backyard. A local beekeeper came out to hive the swarm, and there it stayed for some weeks. Al was fascinated watching the bees come and go. As a teen, he took up beekeeping as a hobby, producing enough honey for his friends and family. However, the hobby took a turn for the worst when tracheal mites infiltrated his hives, destroying them.

Many years passed, and, in 1985, Al decided to turn his passion for beekeeping into his full-time occupation. He started back up with only a half dozen hives, slowly growing his numbers each year. These days, the family manages upwards of 200 colonies each summer and provides thousands of pounds of pure and local honey to customers all throughout the region.

Alyssa Fine began to experiment in her kitchen with small quantities of beeswax and honey, both supplied by her father's local beekeeping business. While that first batch of lip balm wasn't quite up to par, it inspired her to continue creating homemade cosmetics with natural ingredients.

A few years later, a recent college graduate fascinated by the beekeeping world, Alyssa received the honor of serving as 2011 Pennsylvania Honey Queen, sponsored by the Pennsylvania State Beekeepers Association. During her reign, she traveled extensively throughout Pennsylvania educating the public about the importance of honey bees. In addition to her presentations, she sometimes drew on her background to give beeswax cosmetics demonstrations, much to the thrill of her audiences.

After returning home, Alyssa began to wonder if she could somehow marry her interests in natural cosmetics and beekeeping with her public speaking skills and business management degree. She wanted to provide top-quality natural cosmetics to people all across the country.

Alyssa uses the premium beeswax culled during the honey extraction (along with the honey itself!) to handcraft a line of natural cosmetics. You'll find everything from lotions and lip balms to salves and scrubs, with plenty of variety in between. A division of the apiary, Alyssa’s Abeille Beauté brand— from the French for "honey bee beauty,” is handcrafted right here in Pittsburgh, using only the premium beeswax and honey sourced locally from the family's apiary.

First sold under the eponymous family label at various farmers markets and from the apiary, itself, it slowly became clear that other so-called beekeepers and honey producers defined “pure and local” broadly, often selling mislabeled, adulterated products to keep up with market demands. Worse yet, these suppliers turned to the bulk honey market to keep their bottling tanks flowing, filling jars with product that originated in Asia and beyond—far, far from the Monongahela Valley and completely unworthy of the “local” moniker. In 2014, in an effort to set their hand-extracted 100% pure and local varietals apart from the posers, Alyssa created the “Pittsburgh Honey” brand which exclusively sells pure, local honey.  The brand is now synonymous with purity, and, through its honeycomb bridge logo, easily recognized as a truly local product.

Pittsburgh Honey is still available direct from the family apiary, as well as Alyssa's own retail outlet in nearby Squirrel Hill, Pennsylvania—the first and only store of its kind in the region. Stop in, or order some today. 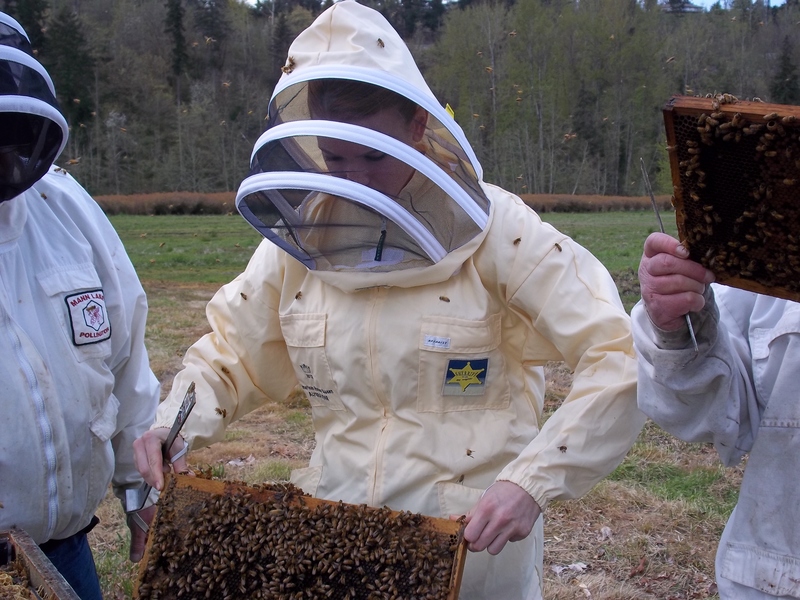 Alyssa grew up with a fascination for all things honey and beekeeping, which was pretty easy, considering that her father kept a few hives in their backyard. Eventually, he turned that hobby into a business, and as a teenager, Alyssa found that she could use the leftover beeswax to make her own lip balms, which she made for friends and family. After graduating from Penn State with a degree in Agribusiness Management, Alyssa took a gamble and competed for the title of 2011 Pennsylvania Honey Queen.

She spent the next year traveling the state teaching the public about the importance of honey bees and beekeeping. The following year, Alyssa was able to reach an audience on a much larger scale as she traveled throughout the entire country as the 2012 American Honey Queen, even making it as far as to visit the hives on the White House lawn. Once she retired the crown, she realized that being a restaurant manager wasn’t very fulfilling- she could use her skills to help grow the family business, instead. And so Abeille Beauté was born. Alyssa left her job and began to handcraft a variety of natural skincare products using the honey and beeswax harvested from her family’s hives. As she attended craft and vendor shows, customers would routinely ask for local honey, too. However, the name Abeille Beauté just didn’t translate very well to honey.

After a brainstorming session with her husband, Adam, they landed on Pittsburgh Honey, and it stuck! In August of 2017, a small storefront quietly opened up on Murray Avenue. She signed the lease, and in just two short weeks, Pittsburgh Honey opened its doors on September 1st, just in time to celebrate National Honey Month.

If you choose to invest, you will make a one-time investment via ACH that will be transferred to a secure escrow account. Once the campaign successfully reaches its target, the funds will be distributed to Pittsburgh Honey.

*Individual payments may vary slightly based on rounding.  Potential repayments include principal and interest, they do not include the one-time fee which is assessed when you make your investment. (Note: Returns are not guaranteed and investors could lose some or all of their investment) These amounts are calculated as a fully amortizing loan: principal and interest are paid down starting with the first payment.

When Pittsburgh Honey pays as agreed, you will receive quarterly payments directly into your bank account along with a short update from the team. In the event of a default, you will be asked to elect a representative to manage the collections process on your behalf.

Additionally, to cover expenses associated with each investment, Honeycomb charges a 2.85% investment fee capped at $21.76 per investor.

We think that would be a great idea.

+ HI, I am very glad to have invested! You have excellent reviews on Google and Yelp, and your background is terrific. I may do more, but I have two quick questions first: 1. I am almost sure from your financials that you have no other creditors that would be in line before investors here should the personal guarantee become relevant (I wouldn't invest unless I thought that was a very remote possibility, but I wanted to ask anyway). 2. It is so incredibly sad what is generally happening to bee populations over the past decade or so, but I am assuming that bees you

Hello! You are correct. We have no other creditors, the first time we've reached out for any funding is through this Honeycomb project. As far as bee population problems go, we definitely see our share of difficulties, just like other beekeepers. This past winter was particularly difficult, in that we had a poor summer prior to it, and the bees just didn't over winter well. That being said, we have never experienced any serious problems like Colony Collapse Disorder. My father has been keeping bees for decades, and uses a variety of techniques in order to maintain their optimal health. He medicates twice yearly, once before and after the honey flow, to treat for various diseases, manages the colonies biweekly, and also regularly attends industry conferences and club meetings to learn about new advances in honey bee management and health. Of course, there are always unknown factors that we cannot control, like the weather, but we certainly do our best in the meantime. The addition of these extra hives will substantially increase our honey production capabilities this fall. I hope that helps!